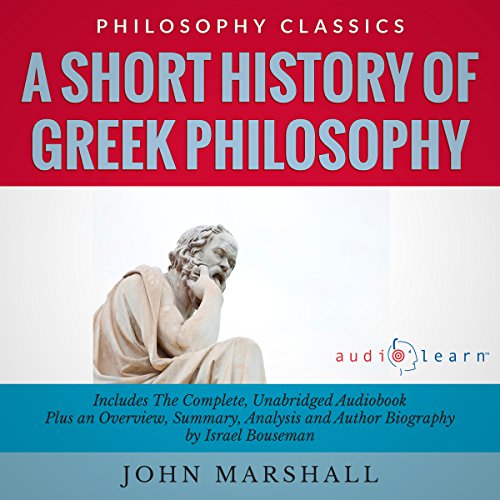 A Short History of Greek Philosophy by John Marshall

A Short History of Greek Philosophy takes the listener on a tour of the golden age of philosophy. Marshall shines a spotlight on the origins of Western thought, giving an elegant and concise review of the major philosophers and schools of thought in Greece. He begins at the dawn of the era with Thales and Anaximander, and visits every notable originator of thought in Greek history, leading finally to the Sceptics, Epicureans, and Stoics. In this slim work, the works of Socrates, Plato, and Aristotle are explored with precision and grace. Marshall details the philosophical context that created the foundation for the greatest thinkers in Western history and shows the road taken by philosophy as a result of their influence. A Short History of Greek Philosophy covers the vast subject of Greek philosophy in a way that is simultaneously brief, authentic, and interesting. It is accessible to the casual listener and explores the subject with a depth and clarity that will appeal to the serious philosopher.

Twenty-five editions of this work have been published since it was originally written in 1891. Marshall's comprehensive handling of Greek philosophy has been recognized by scholars and universities and is currently held by more than 600 libraries worldwide. This version of the work is preceded by a summary that effectively reviews the major ideas present in each section, giving the new listener an easy entry point to this vast wealth of material, and giving a review for those already versed in the subject. It is an excellent introduction to Greek philosophy that will appeal to students of philosophy and to anyone interested in the basis of Western thinking.

Difficult to listen to.

Too academic and a bit anachronistic. Of course no-one doubts the accuracy of the author's writings, it is just difficult to follow. Monotonous narrating doesn' t help either.