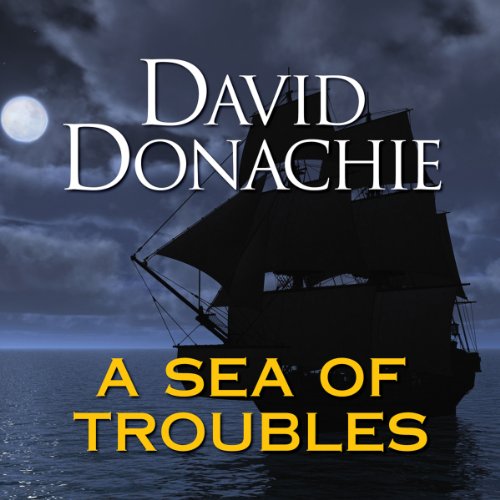 A Sea of Troubles

By: David Donachie
Narrated by: Peter Wickham
Try for £0.00

1794: In the wake of the Glorious First of June, Lieutenant John Pearce has pressing matters to attend to. He must undertake an urgent commission from Lord Hood, track down midshipman Toby Burns, and placate Emily Barclay. Meanwhile smugglers whose ship Pearce inadvertently stole, are on his tail. And it is not only John Pearce who has his fair share of trouble.

The triumphant Channel Fleet returns, but the battle is already the subject of controversy - and Ralph Barclay is accused of holding back from the action. Pearce turns the table on his enemies and sets off for the Mediterranean with Emily Barclay. He can only hope that his troubles will end along with his mission. But are they only just beginning?

What listeners say about A Sea of Troubles

No - while the series started well, each book has become progressively less interesting, spending far more time on rehashing previous events than progressing the story. This is the last book I will read of this series - the story has ground to a halt.

Would you ever listen to anything by David Donachie again?

Some of the humour lifted what was otherwise a very heavy story - had I been reading rather than listening to this book I would probably have put it down. I found myself tuning out and when I tuned back in - finding i had not missed anything of import.

Was A Sea of Troubles worth the listening time?

So far this series has used up 10 books - I suspect it could have all been done and dusted in a very good trilogy. this is turning into a soap opera.

The evolution of the main character is evolving well. Main gripe is the amount of repetition and continual revisiting of previous story lines. There is a significant percentage of the book devoted to this with little benefit to those that have followed the series from book 1. That being said, the book is an excellent addition to an absorbing series.

The Pelicans are reunited

This is the ninth installment in the John Pearce series. The year is 1794 and Pearce has become a grudging secret-errand boy to the powerful minister Henry Dundas. Emily Barkley wants Pearce to track down her nephew Midshipman Toby Burns.

Toby Burns is now assigned to the HMS Agamemnon commanded by Lord Horatio Nelson. They go on a series of actions and shore raids. Pearce is living with Emily and Captain Barkley will soon find out, and the Pelicans are all together now.

There is a feeling of transition to the whole story, as Pearce deals with the aftermath of the previous mission and prepares for the next. Donachie builds great characters and the story moves right along. There is lots of action and suspense in the story. Please note that this series must be read in the order it was written. I am getting the feeling the series might be winding down. The book is narrated by Peter Wickham.