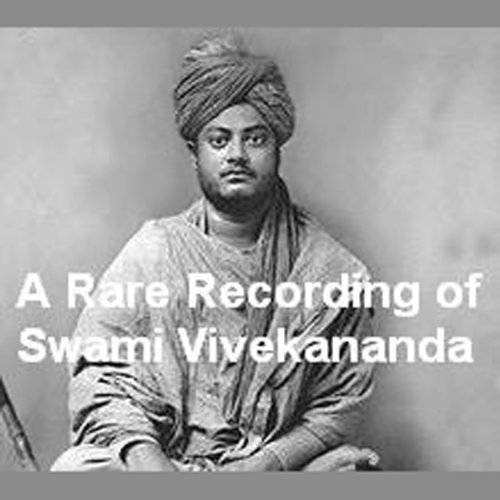 A Rare Recording of Swami Vivekananda

By: Swami Vivekananda
Narrated by: uncredited
Try for £0.00

Indian mystic Swami Vivekananda addresses the 1893 World Parliament of Religions in Chicago, offering an inspiring message of a shared spirituality and the harmony of world religions. He is considered a key figure in the introduction of Hindu philosophies of Vedanta and Yoga in Europe and America, and is also credited with raising interfaith awareness, bringing Hinduism to the status of a major world religion during the end of the 19th century.

What listeners say about A Rare Recording of Swami Vivekananda

I've studied Vedanta for decades and did not know that there were any recordings of Swami Vivekananda. Assuming this is authentic -- and it certainly sounds as if it is -- this is an amazing historic recording that will be fascinating for anyone interested in harmonizing the world's religions.

was truly humbling and wonderful to hear Swami Vivekananda. this is a treasured piece. Blessed indeed to have heard this piece of audio.

This address delieverd in Chicago 11th September, 1893 is so fascinating and inspring. I am very happt to here Swamiji's real voice today. Thank you.

The recording is crackled but the perhaps no Hindu philosopher can ever summarise what the Hindu way of thinking is about as he does in this lecture.

A wonderful recording of his great speech!
Thrilling to hear his own voice and his words!

I am blessed to listen to swami Vivekananda's voice. The recording is not perfect but cannot expect more from 100 old record.