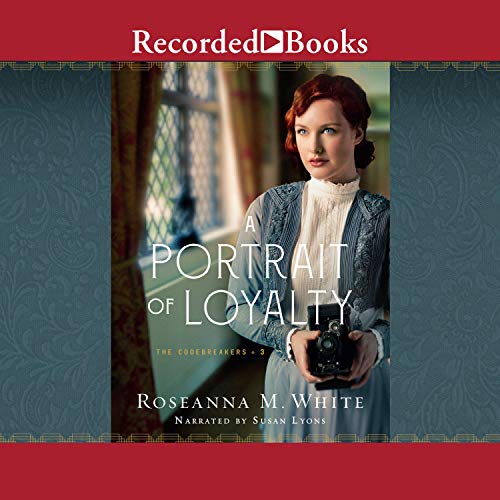 A Portrait of Loyalty

By: Roseanna M. White
Narrated by: Susan Lyons
Try for £0.00

Zivon Marin was one of Russia's top cryptographers until the October Revolution tore apart his world. Forced to flee to England after speaking out against Lenin, Zivon is driven by a growing anger and determined to offer his services to the Brits. But never far from his mind is his brother, whom Zivon fears died in the train crash that separated them.

Lily Blackwell sees the world best through the lens of a camera and possesses unsurpassed skill when it comes to retouching and re-creating photographs. With her father's connections in propaganda, she's recruited to the intelligence division, even though her mother would disapprove if she ever found out.

After Captain Blackwell invites Zivon to dinner one evening, a friendship blooms between him and Lily that soon takes over their hearts. But both have secrets they're unwilling to share, and neither is entirely sure they can trust the other. When Zivon's loyalties are called into question, proving him honest is about more than one couple's future dreams - it becomes a matter of ending the war.

What listeners say about A Portrait of Loyalty

I had the hardest time getting into the story. I persevered and was able to enjoy it from about a 3rd of the way in.

A click. A whir. A moment...
This book is filled with many moments. Wonderful, happy moments. Sad, heartbreaking moments. Moments that will change lives and history forever.
Of course, this book is also filled with secrets. Lily has secrets, Zivon has secrets. I loved how they connected and really saw each other, saw the things others did not.
"Be still and know that I am God" is an important verse in Zivon's life and a recurring one throughout the story. It was also a good reminder for me.

Lily finds light in the darkness, good in the bad, and captures moments. Some are perfect moments.

I HIGHLY recommend this book and series!
Susan Lyons' narration has been magnificent with all the accents, characters, and emotions throughout the entire series!

The Characters, Lily and Zivon lure the reader into his wonderful series. If you like the twist and turns on the ending of WWII or the Russian Revolution this will intrigue you. What grabbed me is the feeling it was set in 2020 political times with people thinking communism would actually work. White creates amazing stories sharing profound messages of faith. In this book God’s messages of “Be Still” leads Zivon’s journey as he tries to save himself and his brother while facing the approaching evil of Marxism, disguised as a better way

Liked the story and narration

I really like the history in this story and the different relationships.
Also liked that some characters were people of Faith and not afraid to say so. One often recalled the Bible quote “be still and know I am God”
I liked being reminded of that.

I loved this book. Looking to see what else this author has. Great Christian lesson with a wonderful story

A great ending to a great trilogy/series. I wish there were more! I'm looking forward to reading/listening to more of Roseanna's books

I hated the fact that it is done! I knew it had to and loved the fact that the characters from Ms White's other stories were in this one. I might have to go back and listen to them all again just to see how they fit together better. As for Ms Lyons' performance, she was good but I think she struggled with the accents. She did have a good cadence and flow.

Another awesome book in an awesome series. You will not regret listening to them all!

Everything about this was marvelous. If you have read the other books in the series you will absolutely love this one! So much history and deep spiritual insights. Narration was phenomenal too.

Favorite of the Series

I have loved this series!!! This book is my favorite of the three!! I can’t wait to start another series by Roseanna M White!!!