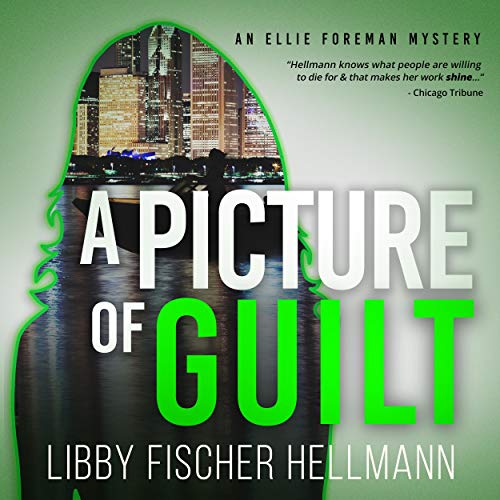 A Picture of Guilt

By: Libby Fischer Hellmann
Narrated by: Nan McNamara
Try for £0.00

The big news story in Chicago is the murder trial of Johnny Santoro, a dock worker whose girlfriend has been killed. Most Chicagoans are betting on a quick guilty verdict, but Ellie Foreman has doubts about his complicity - Santoro is strangely familiar to her. Checking back to the outtakes of a video project in progress while the murder took place, Ellie finds evidence that could save Santoro from a lifetime behind bars. It seems the perfect alibi, but the tape is compromised by radio interference and Santoro goes to jail. Almost immediately, Ellie's world begins to shift: a suspicious vehicle follows her, the Chicago mob shows up, and the FBI wants to question her. She doesn't have answers, but she has questions of her own about the radio transmissions. Everything indicates that someone wants something from her, something bigger than the Santoro case. If only she could figure out what it is.

What listeners say about A Picture of Guilt

Ellie’s in danger for trying to tell the truth

After testifying in the defence of Johnny Santoro after finding evidence to prove his innocence but due to interference being found on the evidence Johnny is convicted. Ellie’s life then starts to spiral out of control as she catches the eye of the mob and the FBI and it seems she may be in danger as well as she tried to get to the bottom of what happened to her evidence and why they are trying to shut her up.

A picture of guilt

A quick and entertaining listening to this audiobook. I knew the direction the story was heading far earlier than I should have, may be because I read so many books in this genre and not because of any particular tells in the story.

Ellie Foreman Does It Again!

Would you listen to A Picture of Guilt again? Why?

Yes! It was interesting, involving, with just the right amount of twists and turns to hold my interest. The story was well-written, and the narration brought it to life.

I really enjoy Ellie interacting with her father.

The scene between Ellie and her daughter at the police station.

This is another look into the life of Ellie Foreman, free-lance documentary producer, and her family, as Ellie once again is pulled, inadvertently, into a series of strange and frightening situations as she attempts to help prove the innocence of a man accused of murder. Her well intentioned involvement repeatedly puts her into danger. While she's busy trying to do the right thing, her 13-year-old daughter is hitting teenaged rebellion, complicating Ellie's life. In the end, Ellie's perseverance and cleverness saves the day and many lives.

This was a very enjoyable listen. Nan McNamara's narration brought all the characters to life. If I have any complaints about her work, it's that while the story takes place in Chicago and its surrounding suburbs, Ms. McNamara isn't from there. At times, she mispronounces street names. She's also not Jewish, and that, at times, shows in her pronunciation of Yiddish words Those are minor complaints.

I really enjoyed listening to this. I have spent much time in the Chicago area and can envision many of the places in which this story takes place. That always helps make it more real.

I received this book as a gift from the author. Her generosity in no way influenced my opinions on this audio book.

What a great ride. Just the right balance between murder mystery and espionage to keep the pace flowing. The main character is very likable and the situations are scary and adrenaline pumping.
I highly recommend this one.

The narration was excellent. I found a narrator that I thoroughly enjoy listening to.

I requested a free review copy of this audiobook and I am leaving an honest and voluntary review.

A Picture of Guilt

Ellie Foreman is a single mother to a 13 year old girl named Rachel. She is also a video documentarian. When she sees the photo of accused murderer Johnny Santoro, she knows that she has seen him before. When she realizes that she has a video tape of him that could prove his innocence, she has to act on her conscience.

I did find Ellie to be rather annoying at times and I just wanted to slap her or shake her to make her see reason! But, that seems to be the case with a lot of the heroines in these types of books.

The writing is very good and the story moves at a fast pace. The addition of Ellie's relationship problems and the growing rebellion of Rachel against her mother add another dimension to the story that keeps it from being just a thriller.

Some parts of the story seem a little contrived and I found it hard to believe that the FBI would allow Ellie's involvement in the highly dangerous situation at the end. But, all in all, it was a timely, well written thriller. I enjoy Ms. Hellmann's books a lot and will continue to read and/or listen to them when I have the chance.

The narrator, Nan McNamara, did a great job and kept the action moving at just the right pace. I would definitely listen to more books that she has narrated.

So well-written and entertaining

My eighth read/ listen from author Libby Fischer Hellman. So many books, so little time to read. I was given a book by the author and after having read it I decided to read more by this author. I'm glad I did. I'm a character reader, I get into the characters, their story, who/what they are. The author does a great job of developing Elle Foreman quickly & thoroughly. The significant characters in her writing are developed similarly along the way. Outstanding read! What other blurbs can I use to describe these books? This book is in all senses of the word, a thriller, from beginning to end. That’s it, no more spoilers from me though if there are more books about this character I can not wait to read them. Oh well, buy the book, read the books, get into a good author and some good characters as I have. I have to mention the outstanding job the narrator did, she became the voice of Elle Foreman! (RIP Marley January 20, 2014 - July 24, 2018).

Almost, but not quite

The best part of this book was the narration, the character voices are dynamic and clear and the delivery helped me keep listening to the story.

I know that in many murder mysteries it's vital for the lead character to go places they wouldn't normally be allowed to go, but this book took it too far for me to believe it was possible. The FBI agent was a total push over giving into Ellie all the time and this does not come across as realistic.

Honestly, I didn't really like Ellie, she came across as self involved and a bit of a drama queen. She needs a good reality check, the world does not revolve around her.

I don't think it helps that I haven't read book one. There were definite spoilers and I got the impression that the relationship dynamic would make more sense if I had the history that I'm assuming is in the previous book.

There were some interesting twists, and I don't regret reading it, but I'm also not going to look for more in the series.

A Picture of Guilt by Libby Fischer Hellmann pulled me in from the very beginning. This book is a standalone listen, and has the character of Ellie Foreman as the primary character. I loved the imagery in this book, and was pulled in by the twists. I really enjoy how the author incorporates photography terms into the background of the story. I had not guessed the killer, and love that when it happens in a book. I found the narration by Nan McNamara to be great. I enjoyed her eloquent voice and thought she added to the suspense. I requested this review copy audiobook and have voluntarily written this review. The potential of domestic terrorism happening is part of this book, and well written. I loved the clues the author wrote in this story.

I understand this is the second book in a series. I have not read/listened to the first book but I found the book fairly easy to follow so I'm not sure if you need to read them in order or not, although I'm sure it would give a little more of a back story to the main characters.

I found the "mystery" easy to follow, a little predictable and unrealistic at times, but hey books are supposed to take you away from real life so sometimes unrealistic is a good thing.

I found the narration to be really good, although the accent was a little off for someone in Chicago.

Thank you for the opportunity to listen to your book...it was enjoyable.

This was a well written mystery full of twists and turns! Narration was great!! I can not wait for the next from Libby Fischer Hellmann. I was given this free review copy audiobook at my request and have voluntarily left this review.

Loved the story! I really like Ellie, she's awesome! I thought the characters were well-developed and enjoyed the storyline, full of action & suspense ! All the ups & downs, twists & turns, it's everything a good mystery should be. Loved the story, loved the narration. Now want to read more! :)
I was given this free review copy audiobook at my request and have voluntarily left this review.

This book was good. I was immediately drawn to Elli's character. I enjoyed d her trying to do the right thing and sluething around to get answers. There were somethingsbthat seemed a bit too far for he'd for reality and I really thought the FBI agent was going to be a "bad guy". Overall this was good book to listen to.