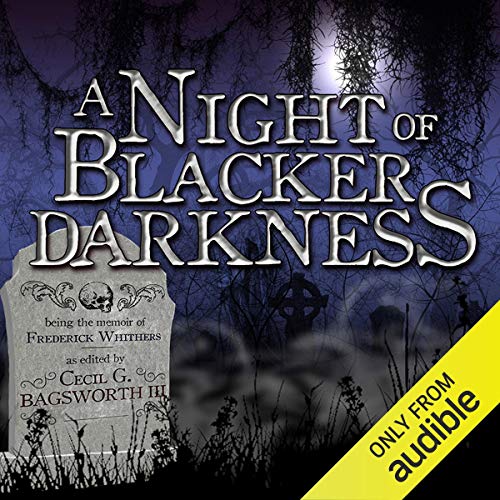 A Night of Blacker Darkness

Being the Memoir of Frederick Whithers As Edited by Cecil G. Bagsworth III
By: Dan Wells
Narrated by: Sean Barrett
Length: 6 hrs and 18 mins
4.0 out of 5 stars 4.0 (111 ratings)

A Night of Blacker Darkness

No one else has Dan Wells’ hilarious new novella - it’s not available in print, in ebook, by mobile phone text or Victorian phonograph. Audible is bringing it to you exclusively, for a limited time.

The basic premise is this: it's 1817, and a man named Frederick Whithers is wallowing in jail for a crime he didn't commit, desperate to get out so he can go and commit it for real. He fakes his own death and escapes in a coffin, but when he gets to the graveyard and crawls out of the coffin, somebody sees him and assumes he's a vampire. It's pretty much all downhill from there. Frederick spends the rest of the book doing everything he can to steal a massive inheritance from a dead man, all the while running from constables, vampire hunters, ghouls, poets, proper young ladies, highly improper young ladies, morticians, mysterious figures, and the most pathetic collection of vampires to ever disgrace a work of fiction.

The book is Extremely Silly: imagine a horror story, as written by Monty Python, in the style of the old screwball comedies like The Producers, What's Up Doc?, and Some Like it Hot, and then imagine that for some reason it's also in the style of a Victorian frame story starring John Keats and presented by a fake historian. A delightfully funny novel full of witty dialogue brought to life by the narrative voice talents of Sean Barrett.

What listeners say about A Night of Blacker Darkness

A night of utter Joy

A silly, jolly gothic romp. Both I and my sister really enjoyed this piece of well plotted and beautifully narrated fun. Its not going to keep you up at night with its deep questions on the reality of exsistence but it will make you laugh.

I loved this book. I got it in one of audible's sale that make by bank balance go pale.

Considering how short it is there's a hell of allot going on in this book, lots of twists, turns and wit all the way. It's like a darker P.G. Wodehouse sometimes, and other times it's just unique. Vampires, crooks and idiots, it's wonderful.

I highly recommend it, the blurb also says it's only here for a limited time so get it now while you still can.

Loved it. Thoroughly silly caper with the most ridiculous vampires. Yes it is a little predictable in places, but i liked the inevitability of those parts.
If there were more by this author I would definitely have a look

If I could give the narrator 10 stars I would. Excellently read by Sean Barrett. Has Dan Wells written a hilarious new novella as is claimed, I doubt it. Has he written a new novella that has brought out the best in Sean Barrett, making this a must have audio book, yes he has. Thank you audible, a really great listen.

It just didn't grab me.

I didn't really enjoy this book and found it a little disappointing. There just seemed a lot to have to take in and it was a bit far paced for me.

Sorry this one isn't to my taste

I have persevered with the storyline but, even with Sean Barrett's exceptional reading style, I really can't get to grips with this one and I doubt whether I will actually finish it (which is very rare for me). I'm sure it will appeal to many readers / listeners but, for me, it doesn't live up to it's billing. It is hard to put my finger on exactly why I can't enjoy it but I think I find it TOO far fetched ... yes I know it's fiction and so is supposed to be far fetched but my personal oppinion is that it is OTT ... sorry Dan and all of your fans.

reading this was purgatory.

excruciatingly unfunny, with howlingly obvious comedic and literary devices, employed with an unsubtle hand to say the least, aaaggghhhh.

Interesting but couldn't wait for it to end

I enjoyed this in part - I loved the literary and historical figures popping up throughout the story. It was also well voiced with John being particularly well imagined. However I felt it got a bit repetative towards the end. For example at the start it was funny that everyone believed Frederick was a vampire, but by the end and in light of his companions being with him all the time - they still thought he was killing the victims they found. Maybe some people would find the absurdity really funny (and maybe they are right) but to me it just felt laboured and I'm afraid I just wanted it to end.

A Rollercoaster Ride of Nightmarish Lunacy

I loved this book. I occasionally dip back into it weeks later to hear a clip of the craziness, but like being locked in a room with a funny but totally mad uncle, it can leave you feeling a bit breathless. So dark it sucks light in, the story rocks from one group and place to another and reminds me of the craziness of Monty Python as written by Mel Brooks. Very enjoyable, but concentrate; I will be asking questions later.

A tale of vampires, money, mishap and great minds

Where does A Night of Blacker Darkness rank among all the audiobooks you???ve listened to so far?

This is one of the best read and most enjoyable books I have listened to in a long, long time.

What was one of the most memorable moments of A Night of Blacker Darkness?

One of the best moments is the vampire discussion when they first meet our hero in the cemetary.

What does Sean Barrett bring to the story that you wouldn???t experience if you just read the book?

The multiple voices are well done and fit the various characters so well. The slow speech of the undertaker is marvelous and Keats is great.

I would not call the book moving in a deep metaphyscal sense but I will admit I had to keep picking myself up off the floor when I had fallen laughing. If you call tears of myrth moving I would definately say I was moved.

What a wonderful book, what a wonderful reader. Truly an enjoyable listen. Sean Barrett takes an enjoyable, well written and wonderful tale and makes it so much more. Hats off to Sean and Dan. I must admit it was refreshing to see the true power of vampires not that stuff that others would have you believe.

The exploites of our hero, the twists and turns of the plot are great. I will not give anything away because it is so much fun. Just know that when you think you have it figured out you will only be partly right and there is much more good stuff to come.

May vampires always have the same problems, trials and success as experienced here.

This book is a perfect antidote to the plague of brooding, seductive and powerful vampire romances infesting the shelves. The vampires, far from being a menace, are inept and brainless. Fortunately for our hapless "hero", so is the vampire hunter and just about everyone else caught up in this farce. Frederick , never the less, doggedly slogs through vampires and vampire hunters while dodging his murderous and untrustworthy but lovely partner in crime as they race to steal an inheritance. He does so with a single minded determination helped- or hindered- by the poet John Keats and a rather bloody minded Mary Shelly.

A fun read and a good performance

Wow, this book is so funny, and keep me up all night! Please find more, and reply with recommendations!!!

this was really entertaining. The story has a totally nerdy kind of sense of humor and is just a series of gags, one after another, but that didn't make it any less fun or satisfying to listen to. I loved when Mary Shelley showed up as a grave robber.

Quite a good book, though don't look for it to fall into any one genre easily. Perhaps the closest fit is "absurdist", but even that doesn't fit well. The story moves at a brisk pace, with plenty of twists and turns to keep it interesting. The cameos by famous authors offer an interesting character mix.

Would you consider the audio edition of A Night of Blacker Darkness to be better than the print version?

Sean Barrett's performance definitely added something I would have missed in the printed book.

What was one of the most memorable moments of A Night of Blacker Darkness?

The epic battles of silly logic throughout the book. Laugh out loud funny the entire time! John Keats' character was a delight!

His serious tone added so much to the story and made it feel so authentic that the comedy was perfectly complimented. His different voices for each character were fantastic!

I actually was not quite at a chapter break when I had to be in class... I ended up listening through the entire hour. Couldn't put it down!

Dan Wells has risen to become one of my absolute favorite authors between Night of Blacker Darkness and his Serial Killer series.

Made me start giggling on the bus to work!

If you could sum up A Night of Blacker Darkness in three words, what would they be?

Light-hearted, clever, fast-paced adventure that with the kind of disasters and pickles I can see myself getting in to but hope I never do! The hero is loveable for his hopelessness.

Would you listen to another book narrated by Sean Barrett?

I don't think the narrater 'got' the book. He didn't read it with quite the pace and dramatic emphasis it needed. It was quite well read but needed a bit more oomph!

Definitely worth a listen if you need a few hours with something silly and funny. Very much in the style of Ealing comedies such as The Ladykillers.

This is a must buy!

Dan really has out-done himself with this short story. I honestly cannot recall when a book has made me laugh out loud--and this has several moments that got that reaction. It is simply an amazing read/listen and everyone should buy it. Do it now, you won't be disappointed!

What a brilliant comedy!

I loved every second of this witty comedy. The fun characters and screw-ball plot made for a very enjoyable listen. Narrator did a great job and nailed the comedic timing!

This is the book I listen to when a bit stressed because the farcical, light-hearted gothic horror story reminds me not to take life too seriously. If you like Terry Pratchett’s Disc World books, you will like this too. It’s the same type of exaggeration that lets us examine reality it a new light.