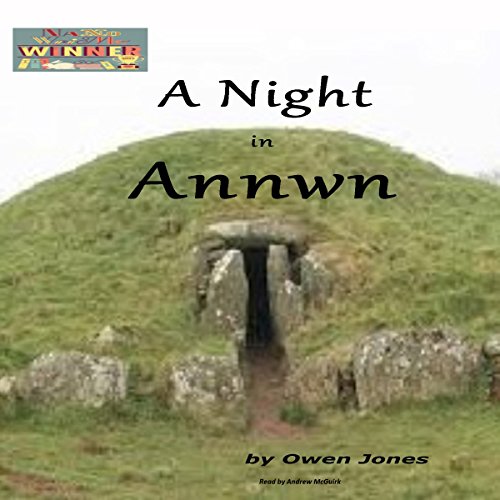 A Night In Annwn

The Story of the Near-Death Experience of Willy Jones
By: Owen Jones
Narrated by: Andrew McGuirk
Length: 5 hrs and 10 mins
Categories: Fiction, Chick Lit & Romance
4 out of 5 stars 4.0 (1 rating)

A Night In Annwn

William Jones, a sheep farmer from the Brecon Beacons, had led a happy life, until his wife, Sarah, died young. It left him devastated and seemingly bent on self-destruction. His daughter, Becky tried to help, but even she was losing patience with her father.

One evening, he is certain that he has died and been put out of his misery, but it was not to be. He recovered. However his life was never to be the same again.

He had discovered Annwn where his wife lived, and his newly found vitality changed his life and that of all those with whom he came into contact.

A Night in Annwn is a love story that spans the greatest divide - that between life and death; a look at a near-death experience and a new take on the mythological Welsh Heaven, which is Annwn.
Be prepared to see another side of Welsh Celtic mythology, but you will never think of death in the same way again.

listend to this but took a while as I normly listen to non-fiction.A very nice story in a sleepy town in wales...

A tale that lingers

I gave this title four stars even though I didn't love, love, love either the story or the performance. Why? Because the story did make me think about its core message and lingered in my consciousness long after I'd moved on to other books. I've read Mr. Jones' before, and though his story telling could use a bit of streamlining and editing, he always has a message to convey and succeeds in holding the reader/listener's attention. Willy Jones' life turns around dramatically after a near-death experience that occurs while he is wallowing in a protracted decline following his wife's death. He doesn't so much see the light as realize that the light on the other side is much sunnier and that he has good he can still do while waiting for his own entry ticket to that sunnier land. It's all a bit simplistic and too-good-to-be-true, but the author claims the book is based on real occurrences, so who knows? I requested and received a complimentary copy of this audiobook in exchange for an honest review, and I'll probably read/listen to more of Owen Jones' work in the future. This book is available as an Audio Escape title, but I think listeners should know it is not typical "Escape" material. There is love, but not romance, and it's definitely not what I'd want if I wanted a simple "escape" listen.

a look at Life and Death

A man who walks the line between life and Death after loosing his wife discovers what waits for him on either side. A thoughtful story that made me appreciate what I have in life.

A Story of Spiritual Awakening

According to the author this is a partially true story, which makes it all the more interesting.

When the story opens we're introduce to William Jones whose wife left this earth five years previously. William drinks most of his meals and has allowed his isolated cottage in the welsh countryside become a bit of a dump. A former sheep farmer who hasn't had a flock of sheep in five years, William's only activity is a daily walk up "his" mountain with his beloved sheepdog. On one of these walks William's dog suffers a heart attack, as does William shortly thereafter.

He awakens to find himself in Annwn with his beloved wife, Sarah, by his side. She explains to him that he hasn't passed over, but is visiting Annwn while his earthly body heals in a hospital. Through the guidance of Sarah and later, William's own spirit guide, he is introduced to Annwn and unfamiliar concepts of how things work there, such as his own thoughts controlling how much light there is and where it comes from, what clothes he's wearing, and even whether he's wearing clothes at all. On the other hand, the buildings in Annwn are not as subject to being changed by thought - not that they don't change at all. In one building he climbs more stairs on the way in than on the way out, and the footbath that was by the door when he entered is no longer there when he leaves. Not only is William introduced to new and unsettling ideas about how Annwn works, but new and intriguing ideas related to the spirit.

Once William recovers from his heart attack in the real world, he continues exploring spiritual ideas using meditation, yoga, healing circles, and more, with the help of books, a spiritually based church, and the people he meets in the church, along with his own spirit guide that he met in Annwn. His daughter accompanies him on his spiritual journey. As part of his spiritual awakening William begins reaching out and helping others, and through his newfound activities develops a strong sense of meaning in his life while at the same time positively affecting the lives of many, if not most, of the villagers.

This book is mostly an exploration of spirituality with William's story to give it flesh, as it were. If you're interested in a highly palatable introduction to spirituality I can recommend this book. I was given this free review copy audiobook at my request and have voluntarily left this review.

I loved it! The narration was great! The author did a great job with the character builds and plot. I look forward to reading more books by this author! I was given this free review copy audiobook at my request and have voluntarily left this review.