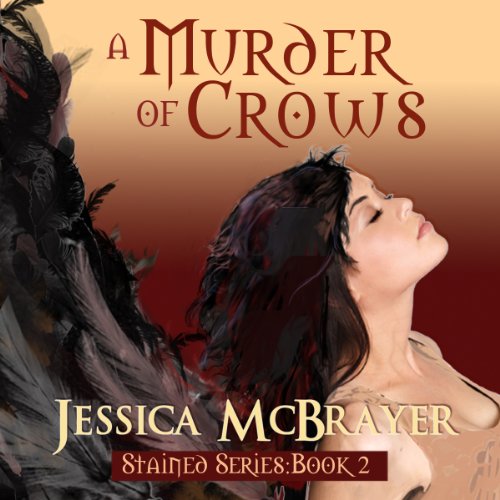 A Murder of Crows

After Sé and Thorn’s nearly deadly encounter with Thorn’s brother, Caleb, the couple heads to Ireland to recuperate at Thorn’s ancestral home. As a witch, Thorn walks into a less-than-warm reception in the staunch Protestant town. And when children go missing, Thorn and Se are the first suspects. But those who remember Thorn and the old ways come to her for protection - and to find the children.

While Thorn summons other witches for help, Sé’s dreams are haunted by visions of his grandmother’s death. Raven, Thorn’s familiar, amasses a network of crows to spy and find the truth about the unfamiliar dark magick leaking out of the Mourne Mountains near Thorn’s home. Soon Sé discovers new powers within himself while Thorn delves further into her wild magick. With the help of new friends and old, Sé and Thorn prepare to battle a force greater than any they’ve ever faced, one that will either destroy or transform them.

What listeners say about A Murder of Crows

Get your ears into this one!

I read the audio edition and feel that Valerie Gilbert's performance adds a lot to the physical and emotional atmospheres.
And there is plenty of atmosphere, imagery, and characterization done by the author. It's better if you have read Stained and The Raven's Tale, but that's only a matter of degree. The story reaches out and grabs you to read until finished.

An amazing followup to the first book

The growing relationship between Se and Thorn is enough to make your heart beat faster. While most series featuring the same couple can become boring, this series just keeps upping the ante. I love Thorn's growth as a witch, mastering her powers, fighting evil together with her man. The Irish backdrop was wonderful, and the narrator's ability to do realistic accents really enhanced the listening.

Love the book, not the narrator

I am a huge fan of Jessica's books. I love the not quite realistic take on a natural witch. It allows for escape but doesn't take it to disbelief.
Unfortunately, this narrator is annoying beyond words. Overly dramatic, uses incorrect inflection, and is just grating overall. However if you can get past that, the books are incredible, interesting and enjoyable.

I really love this book. this series is great. I can't wait for the next one. the story is fabulous, I thought the writing was great, and the narration was wonderful. the accents were perfect. she is very talented and it's fun to listen to.

This book would've been better if I read it myself. Too many pauses and odd inflections.
The book itself is a good continuation of the first book but it is more paranormal instead of a mystery. Caleb was a much better for.

I doubt I would recommend this story to anyone.

Let me state, that it’s a little confusing if you start reading/listening to book 2 in this series without having read the first one. There were so many references throughout the story to Caleb and what monstrous things he did. Yet, there were never really mentioned in book 2, besides saying that Shay was hurt.

All the lovemaking and lovey-dove stuff was eh…boring. Of course we learn that the lovey stuff helps with the wards on Thorn’s house but still. Nothing was really happening, no action. It’s like they’d make love, talk lovey-dovey to each other, eat, and sit around waiting for something to happen. All that = boring.

Has A Murder of Crows turned you off from other books in this genre?

So this is the third story I’ve listened to with this narrator. While she does really good with the accents, there are so many times where she suddenly talks slower or robotic-like. There are also the times when emphasis is put on random words, or so they seem to me. An example: ‘She lathered butter ON it.’ It annoys me because I can’t figure out why. I guess it’s just the way she talks. Actually, now that I’ve thought about it she makes me think of William Shatner and his random pauses. Lol Shatner describes the pauses as having been made when he was trying to remember what he was supposed to say.

If I would have read/listened to book 1 in this series I would have (maybe) had a closer connection to the characters in this story. But because I hadn't I felt disconnected from what was going on, although not much really was.

One big question? What is Thorn’s real name? Or how did she get ‘Thorn’ as a first name?

There seemed to be several mistakes I noticed based on grammar. One example was with the word ‘slidded’. I don’t remember what part of the book, besides near the beginning, but the word should have been ‘slid.’ There were also several things that I had issues with (read below).

Why didn’t Thorn ever get the training she needed after her Mamo (?) died?

Why did Thorn and Shay go to Scotland in the first place? I know Thorn had the house there but…

How many days had gone by from the time Thorn and Shay get to Scotland and the little town were the house was before she decides to call her uncle to let him they got there? I found it strange that she would have wanted so long.

If Thorn’s familiar is a true raven, meaning he can’t change into anything else, which seems to the case, how is he able to actually speak?

There was a part when Thorn told Mara that she’d been wanting to get her hands on her because of the tattoos. Yet, Mara had just shown up and the two of them didn’t know each other, so how could she have been waiting?

Speaking of Mara. Why does Mara pronounce her own name as ‘Mar-a’ like ‘Mar + a’? Yet, any reference to her, whether it’s the other characters or narrator herself, it’s pronounced as ‘Mare-a’? That made no sense to me. I can’t imagine the name was spelled directly depending on who was using it.

How does referring to your significant other as ‘lover’ in Gaelic considered sentimental? I could understand if Shay referred to Thorn as ‘my love’ but lover? How is that meaningful? It’s like he’s reminding her that they have sex together.

The spells that Thorn used were very cheesy. That is all.

There was a part near the end, after Shay receives his powers, where he and Thorn are talking to each other, specially about how they know Mamo? Carrie had killed Shay’s grandmother. Thorn comments how Shay and his deceased grandmother are a part of her family now and she wants a blood revenge or something. Shay ends up saying something like how Thorn felt like a son to him…huh?