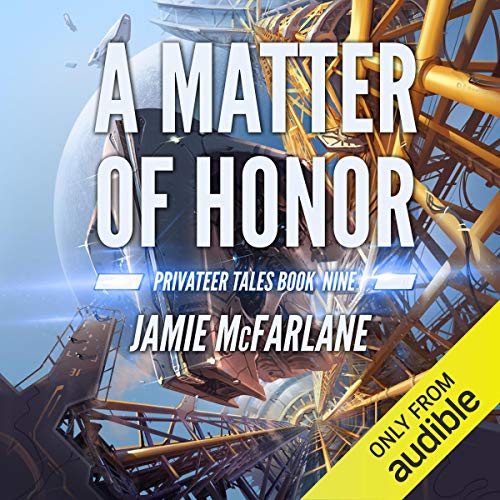 A Matter of Honor

By: Jamie McFarlane
Narrated by: Mikael Naramore
Try for £0.00

Following closely on the heels of Buccaneers, Liam and the crew of Hotspur take a much needed vacation on the tropical planet Curie, where they have nothing more to do than enjoy sun and sand. Trouble is never far away for this group of privateers, however, as a mysterious invitation to meet the reclusive Phillipe Anino interrupts their holiday. With more wealth than could be spent in 20 lifetimes, and access to illicit technology and information, Anino discovered a common interest with the crew - the fate of the Cape of Good Hope. Anino believes he has a way to recover the Cape's crew, but to do so will pit Liam and his friends against the powerful Belirand Corporation. Will the crew of Hotspur take the risky mission and become fugitives for the sake of 45 people they don't know? Or will they leave the people on board the Cape of Good Hope to die, alone in the deep dark of space? There's more at stake than any of them could guess. The actions of Liam and his friends could very well change the known universe forever.

What listeners say about A Matter of Honor

Still Hanging in There

I’m still listening and getting through these books with amazing speed, which is always an indicator of a good series.

Just when you think man could sink no further.... I am looking forward to the reckoning with Captain Tullis.

An emotional journey for Loose Nuts that is well told and read that also reveals a few secrets.

I love this adventure

I have shared this story with everyone I know. It is even mostly clean enough to share with my kids. I love to get to know the crew and feel myself slipping into there world

not the best book in the series. plot holes gallore. meh dialog.

It’s good for what it is.

I think it gets into the “love story” aspects but that’s ok. I think they make Hoffen predictably weak. I’ve read all the books to this point and the point where he goes nuts on the planet defense turret he is always weak and completely soft for such a bad ass! All in all I enjoy this series and will continue reading/listening

One of the greatest sci-fi series out there.

This one takes a little while as he seemed to have combined one of his shorter "introduction of new characters" books into this but both story tracks of the main group and the new one are wonderful and enjoyable.

little let down on a lack of badass ship boarding but there's plenty of books to go!

Liam Hoffman is too cocky and is responsible for everyone’s death. Tabitha Masters is a raving bitch that should be locked up in a psych ward.

I could have done with less background on settlement. the rest of the story was great

Another great installment of Privateer Tales

Loved listening to book 9 of Privateer Tales. Mikael Naramore is an excellent narrator and has become the voice of Liam to me. If you haven't listened to the other books in this series I would recommend them. The split narrative in this story is a departure for the series but introduces an important parallel storyline. The crew's actions have crossed a line and now everything has changed. They really had no option but to follow their convictions. At any cost this crew always does the right thing! Looking forward to the next audiobook!

Still a little too much of the Yahoo in the main character, but I'm glad I stuck to the series. it does grow on one.