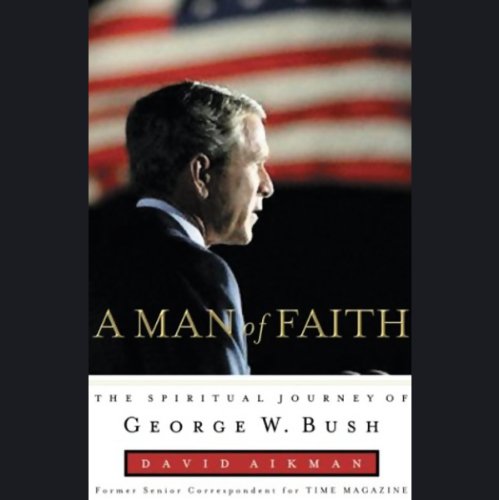 A Man of Faith

More than any other world leader in recent times, George W. Bush is a man of faith...a conservative Christian who has brought the power of prayer and the search for God's will into the Oval Office. His faith has proven to be a bedrock of strength and resolve during two of the most tumultuous years in our nation's history. According to Newsweek, "this presidency is the most resolutely faith based in modern times. An enterprise founded, supported, and guided by trust in the temporal and spiritual power of God." David Aikman, skilled journalist and former senior correspondent for Time, pens this dramatic and gripping account of Bush's journey to faith. Based on interviews and behind-the-scenes stories, you'll learn how:

A Man of Faith is an intimate look at how Bush's spiritual life has impacted his presidency, the nation, and the world.

What listeners say about A Man of Faith

A welcome alternative to a flood of anti Bush literature, without the fundamntalist arguments that tries to assert American moral superiority. The fact that the author is clearly a Bush supporter detracts a bit from the credibility of the book. However, in all very informative and well argued

Wished I heard this years ago!

A man of integrity and character, who doesn't wear his faith on his sleeve but it's engrained in his heart! Very different from what the media portrays!

Focus on the Faith of Presidents

A balanced view which sticks to the topic and does not venture into politics too often. The author is not the greatest reader, but does OK. Nice bonus with sermon given by Bush as Texas govenor. Bush seems sincere about his faith and I have greater respect for his commitment after reading this book. But I voted for Kerry.

A Great Insight Into George W.

This was a great resource in not only understanding George W but also George Sr. and his ancestory. Very interesting facts that govern his makeup and thought process today. I greatly enjoyed the author's voice presentation as well as his own thoughts (not included in the book) at the end of the audiobook.

The book was good but narrator's accent over-done pronunciation, really detracted. It was not a smooth reading.

I thought this was a great book. If you have read First Son: George W. Bush and the Bush Family Dynasty, you will see that this book missed this whole aspect of GW's life. First Son is regarded as a great book that accounts for GW's life. It's really not that great if it left out a lot of the most essential part of his life. It is no wonder that the author of First Son was absolutely surprised (when interviewed) when Bush answered that his favorite philospher was "Christ".

very unreliable source on a controversal subject....found the read very unsatisfactory...sorry i bought this one....

GEORGE BUSH JOURNEY OF A TYRANT

I shudder at the thought that the any of the wonderful American people who i admire for their simple kindness and good values can put the words spiritual next to the name of this man who killed so many civilians in the search for " WEAPONS OF MASS DISTRUCTION !!!! ) so many dead children folks !!!! not ok Not in Gods name never !!!!
Peace Love Harmony and May GOD really bless America with a true Leader GO OBAMA !!!
GOD BLESS AMERICA !!!
GOD BLESS ALL THE AMERICAN PEOPLE !!!

A zealot with his finger on the button

Read between the lines on this one. George W. Bush does not understand the concept of Seperation of Church and State.
I found this to be chilling look at an extreemist with ungodly power. It motivates me to get out and campaign for John Kerry. The country's safety and future depends on Bush being defeated in november!