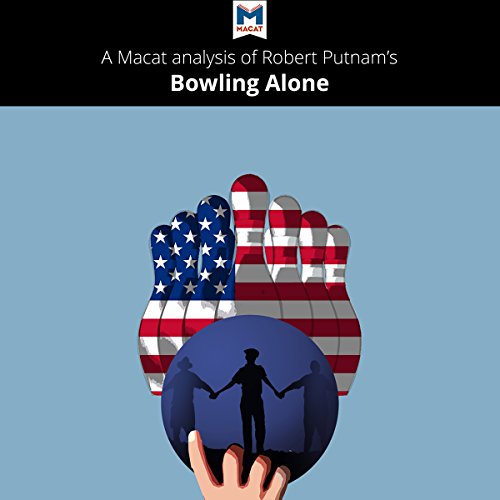 By: Macat Int
Narrated by: uncredited

A Macat audio analysis of Robert Putnam's Bowling Alone: The Collapse and Revival of American Community.

Social capital - the relationships between people that allow communities to function well - has long been recognized as the grease that oils the wheels of society. It facilitates trust, creates bonds among neighbors, and even helps boost employment. In his 2000 book, Bowling Alone, American sociologist Robert Putnam argues that Americans have become disconnected from one another and from the institutions of their common life and investigates the consequences of this change.

Looking at a range of indicators, from membership in formal organizations to the number of invitations being extended to informal dinner parties, Putnam demonstrates that Americans are interacting less and creating less "social capital". Putnam did not invent the notion of social capital, but he was the first to take a broader view, looking at the social capital generated by people's engagement with the civic lives of their towns or cities.

It would be difficult to overstate the impact of Bowling Alone, one of the most frequently cited social science publications of the last half century. You can find out more about how Putnam's ideas have been challenged and applied - and how his work has impacted thinkers in other academic disciplines - by exploring further in the Macat Library.

The first 20 minutes takes you nowhere. And then the analysis is vague with few details provided. I was hoping to share this with my students but there's not enough substance.

easy to listen to and understand, comprehensive and unbiased. will be using macat in the future.