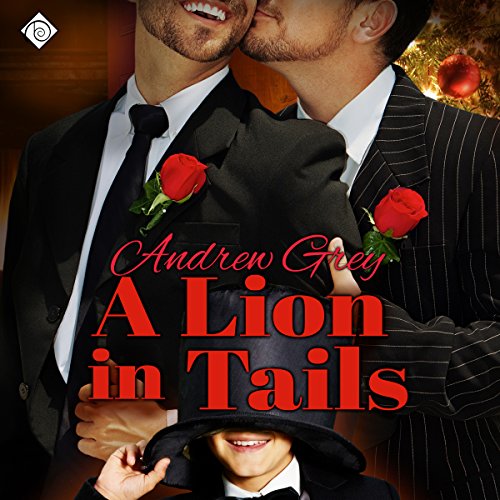 A Lion in Tails

A Lion in Tails

Larry Kincaid isn't ready to be a parent, but when his sister dies in an accident, he takes his nephew, Angus, into his home. The change throws Larry’s life into limbo until he meets Joshua Langdon.

To Joshua, Larry is a lion: growly and strong, but too proud to ask for help. Joshua gets past his defenses and finds a place in Larry and Angus’ family, but Larry's pride gets in the way. Can they turn their holiday romance into a relationship that lasts into the New Year?

The perfect companion to the written version.

Where does A Lion in Tails rank among all the audiobooks you’ve listened to so far?

At the top, I think I'll listen to this one again, regardless of the season.

Larry and Josh's first time. What Larry says to him, AhMazing!

Who was the most memorable character of A Lion in Tails and why?

Little Angus, he is just so adorable.

Short, Sexy and Steamy wrapped up in a pretty red bow! My three favorite colors, oh how I’ve missed you!!

Larry Kincaid inherited the responsibilities of being a father to his young nephew, Angus, when his sister passed away. Every day is about going through the motions with Larry thinking of what is best for Angus. All that changes when he takes Angus to a local shop to get a tux for their annual Christmas party. Angus is immediately enamoured with the shop worker, Joshua Langdon, as is uncle Larry.

Circumstance leads Larry to invite Josh to the Christmas party, and the two share a very heated, very passionate night for an after party. But when Josh leaves in the night without so much as a word or a note, Larry is hurt. A past relationship that went bad left a sour taste in Larry’s mouth and he jumps to conclusions about why Josh left, then refuses to hear his explanation. As fate would have it the two meet again by chance, shopping for Christmas trees. Can Larry let go of the past, be a father to Angus and have a relationship with Josh?

Trademark Andrew Grey with the perfect plot and precise character development. The flow from start to finish was steady and graceful. Larry is a lion when it comes to his role as a father figure and his business, but when it becomes more personal with Josh, he acts like an unsteady kitten. Until Josh calls him out on it, and then it’s on! What he has to do is find a balance between being Angus’s father and Josh’s lover. This book seriously made me laugh, cry and swoon.

If you’re looking for a fun Holiday read that is equal parts sexy and sweet, then this is the book for you.

I do love when a narrator can take a story I’ve already read and enjoyed and add just that little something more to it. There were actually little things in the story that I either missed or just didn’t quite catch when I read it, or perhaps Kelly’s rendition of the written word just brought something new to it. Larry lost his sister and became the sole guardian to his young nephew and he constantly worries that he can’t give little Angus what he needs. Josh sees the man that Larry truly is. A fiercely loyal, strong single father, and the perfect partner for him.

Through Christmas parties, fancy suits and decorating trees these two men fall in love and show a promise of becoming a family. Kelly took Grey’s words and told them in a way that expanded an already fantastic story. Like I said before… Short, Sexy and Steamy! The perfect companion to the written work.

I “read” the whole book but mostly because I was doing something else and the noise was welcome. This had potential but I think the author tried for too much in such a short book; I invested myself in the process and outcome only to be cheated when it just ran out. Not an abrupt ending, just a slow drizzle to an unsatisfying finish.

Narrator was standard for this type of book (short, sort of instalove). For that style he was as good as or better than some. Not one I’d seek out but not one I’d reject for this length and style either.

A sweet story. The pacing felt a bit rushed but it was a very cute story. Great for a quick read.

All I can say about this storyline, being that its a short story, it was enjoyable, and sweet, with pleasurable narration. He did a very nice job. If your looking to listen to a sweet short story, I recommend this book.😌

I really enjoyed this. It was very sweet and somewhat bittersweet for me. Loss of Mom near the holidays is a tender subject for me. I wept, but enjoyed the way the story handled the loss and the season.

This story delivered everything you'd expect for a warmhearted holiday story - sweet, fluffy, and endearing. I loved K.C. Kelly's narration, it made the story more enjoyable by bringing life to the characters.

I loved the story. I laughed, cried, giggled, and even snorted a few times. I wouldn't mind spending more holidays with them. :)

Originally from the 2013 Advent Calendar Series by Dreamspinner, this is a short, sweet Holiday story about a single “dad”, Uncle Larry who ends up raising his nephew after his only sister dies in a car crash. He meets a very cute, very single Joshua at the Tux shop where he and his nephew, Angus, are renting clothes for Larry’s big party.
Though Larry is afraid of including someone new to his and Angus’ life, Joshua is pretty irresistible.
**
Due to the story’s brevity, there’s not much relationship building, so this is more of a look at the beginning of a relationship, than anything else. There’s very little angst, a bit of hot times and a lovely HFN/epilogue for our guys!

Audio
KC Kelly does a great job with this. I love his “kids” voices and Angus is adorable!
There isn’t much different between Joshua or Larry and I kind of wanted Joshua to be a bit “younger” sounding. However, he’s an easy narrator to fall into and definitely gives deep emotion to this light, sweet story.
4 of 5 stars

This is just a toss-off. There is nothing new, interesting or memorable about it. I am disappointed in the author for writing it, and in Audible for selling it.