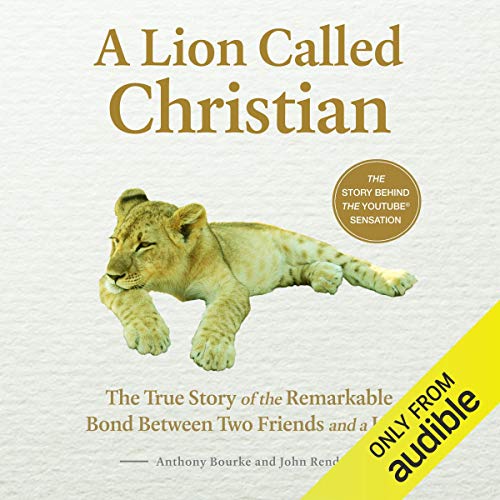 A Lion Called Christian relates how Anthony ‘Ace’ Bourke and John Rendall visited London from Australia in 1969 and bought a boisterous lion cub in Harrods.

For a while, the three of them lived together as flatmates on the King’s Road, Chelsea, where Christian became a local celebrity.

But he was growing up, fast, and even the church garden in which he exercised was becoming too small for him.

How could Ace and John avoid incarcerating him in a zoo for the rest of his life? Originally published in 1971, A Lion Called Christian has been fully revised and updated.

Having learned about Christian originally in 'Born Wild', 'A Lion Called Christian' tells his full story.

Although it is a relatively short book, it's a tremendous companion to Tony Fitzjohns excellent 'Born Wild', and well worth the download.

However, during John Lees narration his accent seemed to drift out of English into a quasi-Australian accent early in the book, and later had elements of a South African pronunciation with selected words. Despite this, if you persevere through the first couple of chapters his accent thankfully settles down. As a result, I've marked the performance down. I will add that this does not detract from the overall story though.

Had the performance been better, it would have been a 5 star review all round.

In summary, if you enjoy anything safari / African / wildlife related, you will definitely enjoy this.