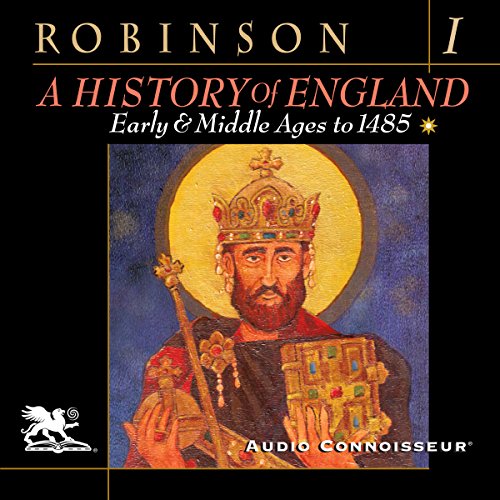 A History of England, Volume 1: Early and Middle Ages to 1485

The history of England can be said to have begun with the arrival of Julius Caesar in 54 BC. Four hundred years later, Romano British civilization came to an end with the withdrawal of Roman military protection and the onslaught by successive waves of Germanic invasions. Angles, Saxons, Jutes, Danes, and Norsemen ravaged Britain for almost 500 years. The native Celtic peoples were displaced and driven westward into present-day Wales, where their descendants dwell to this day.

Although various Saxon and Danish kingdoms rose and fell, it was not until the Saxon king Alfred the Great consolidated the three great kingdoms of England into one and repelled the Danish invaders in the late ninth century that the concept of a unified, English nationstate came into being. But the Norman invasion of 1066 was about to alter everything. And chaos and misery were to follow.

Be sure to hear all four volumes of this magnificent chronicle by master historian Cyril Robinson.

What listeners say about A History of England, Volume 1: Early and Middle Ages to 1485

I really enjoy European History and found this book to be very interesting. From the perspective that we have today looking back more than 6 centuries, you can see the seeds of modern day government, religion, architecture, economics and formal education in their earliest stages. Celtic, Roman, Germanic Saxon, and Viking (Dane) / Norman cultures all played significant roles in shaping the English people and ultimately their Colonies as well. The perception of Nation states in this time period is somewhat overstated, as ruling families tended to outweigh national associations of the general populations. For example, for nearly 200 years English Kings spoke French, while the population spoke old English. And the royal families intermarrying created numerous instances where the King of England or France was pressing a claim to also be the King of the other country as well. The court intrigues and the quests for power were absolutely brutal - creating a state of perpetual warfare which the English ultimately mastered in the middle ages. Cyril Robinson writes from the perspective of being an Englishmen, frequently referring in the book to "us" or "we" - yet I found the subject matter to have been very even handed - he pointed out the good, the bad and the ugly. Charlton Griffin is the premier narrator for this genre and he once again delivers an outstanding narration in this one. If you enjoy English History I would recommend this book, and also "the Plantagenet's- the Warrior Kings" by Dan Jones and "the Birth of Britain - a History of the English speaking peoples" by Winston Churchill.

Fascinating, enjoyable, informative. Not a dull moment in the book. Really enjoyed the narration. I completed the whole book in three days, most of it on two 4-hour driving trips. If I had 3 more such trips to take, I would readily take up the remaining three volumes.

All history is interpretive and selective, and this work is of course no exception. Robinson is straightforward and clear with his interpretation. Thus even if you don't want to go along with him at times, it's clear enough where he's taking you. I found it unusual in a refreshing way how he acknowledges his own interest in the history, with "us" and "our" references in place of feigned abstraction—small cracks in the historian's necessary illusion of unperturbed objectivity.

That's not to say that his interpretation is strident or heavy handed. He comes across as sincere and giving his best effort at objectivity. The characters and the story line are robust and three-dimensional for the most part. He paints with bright and dark colors alike, whether people, places, countries, times, etc. But the story is palpably told by a human, not an impersonal gatherer of facts. And more than that, he is an Englishman telling the story of England; and he doesn't pretend not to be aware of that. In not a few places, I could "hear" the twinkle in his eye in a certain turn of phrase or well-placed observation.

His selection of material seems masterful as far as I'm able to judge. The narrative is coherent and fluid, and he has a particular knack for focusing and clarifying the salient features of the story in the transitions between chapters.

The humor, human focus, and general tenor of his writing, as well as his general approach to history, remind me of Gibbon—a similitude that I hazard to guess with no objective basis was not entirely unintentional.

If history class would have been anything like this I would have loved history even more than I did. Charlton Griffin is perfect.

Cyril Robinson lived from 1884-1981. Undoubtedly a great scholar and historian, there is plenty of substance in this book. I am enjoying it (not quite finished). His Wikipedia entry reflects this book published posthumously in 2012. However, I am thinking that it is a portion of a History that he published in 1930. The reason that I say this, is that he will make references to people under colonial rule that are clearly racist. If you sensitive to such things, then you'll want a more recent publication. Just thought that you might want a heads up on some things. Certainly, not for the impressionable youth.