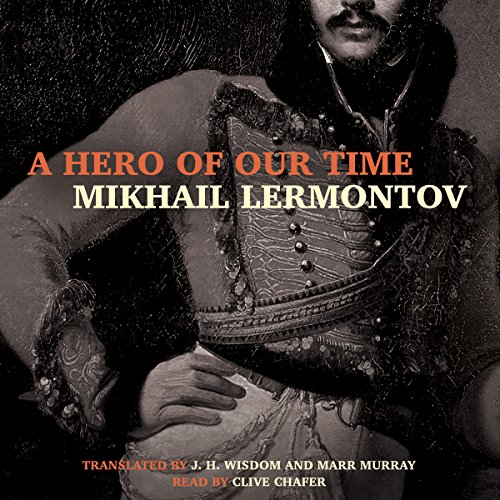 A Hero of Our Time

By: Mikhail Lermontov
Narrated by: Clive Chafer
Try for £0.00

First published in Russia as Geroy Nashego Vremeni, A Hero of Our Time is set in the Russian Caucasus in the 1830s.

In A Hero of Our Time, Grigory Pechorin is a bored, self-centered, and cynical young army officer who believes in nothing. With impunity he toys with the love of women and the goodwill of men. He is brave, determined, and willful, but his wasted energy and potential ultimately result in tragedy.

This psychologically probing portrait of a disillusioned 19th-century aristocrat and its use of a nonchronological and multifaceted narrative structure influenced such later Russian authors as Fyodor Dostoevsky and Leo Tolstoy and presaged the antiheroes and antinovels of 20th-century fiction.

What listeners say about A Hero of Our Time

I had to get use to Clive Chafer's voice. At first it sounded as if he was reading it with the tone of sarcasm. But as the novel progressed I got use to his voice and it did not chafe me as badly. That is not to say I would pick him to narrate any other book I chose. One particular thing he does is end many of his interrogatory sentences with a rising inflection. And so it sounds like a BBC reporter narrating the story. This is very irritating. His voice never got out of the way of the story. It lacked sensitivity. However, it did add a better appreciation to the simultaneous reading of the novel.

An interesting book, better speed up a little

I did like this book very much. If this author hadn't been killed in a duel at age 26 then I can imagine he would have become one of the greatest Russian writers. I really would like to give this a little over 4 stars, but it's not quite 5 stars for me. Still I would recommend this because it's unusual and interesting. Its structure is different, being in 5 sections, so don't expect a regular plot line. I got this book after seeing it in my Audible suggestions. They know me well - I do like a good Russian novel.

I thought the narration good, but I usually listen a little faster. I listened to a little at regular speed and it's way too slow. I suggest going in at 1.10 to 1.25 speed. He's great with voices at least.

I listened to Novels in Translation all summer and a little beyond. I am late delivering my review.

The story of a dashing anti-hero, Grigory Alexandrovich Pechorin told from multiple perspectives. Captures the spirit of the times - especially in regard to personal honour lost and gained - but just as relevant today concerning our personal choices and their consequences. Once you've finished, look up Mikhail Lermontov's bio for a hard-to-match bitter irony.

Hard to imagine that this book was written when the author was only 23 and he died at the tender age of 26. Anyway, a compelling story that only gets better as it goes on. I thought the narrator was annoying at 1st but later realised that his delivery fit that of a bored jaded young man thus nicely fitting the narrator of the book.