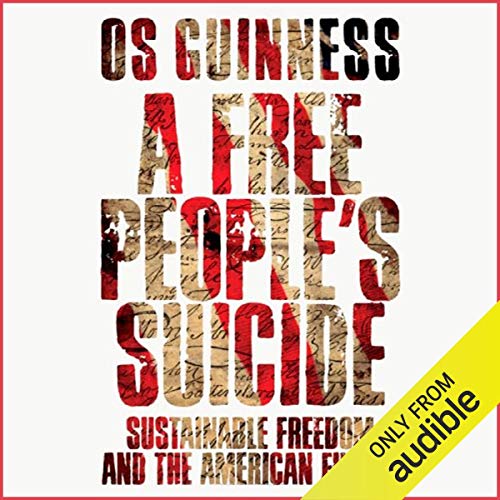 2013 Logos Book of the Year in Christianity/Culture!

"If destruction be our lot, we must ourselves be its author and finisher. As a nation of freemen, we must live through all time, or die by suicide." (Abraham Lincoln) Nothing is more daring in the American experiment than the founders' belief that the American republic could remain free forever. But how was this to be done, and are Americans doing it today? It is not enough for freedom to be won. It must also be sustained. Cultural observer Os Guinness argues that the American experiment in freedom is at risk. Summoning historical evidence on how democracies evolve, Guinness shows that contemporary views of freedom - most typically, a negative freedom from constraint - are unsustainable because they undermine the conditions necessary for freedom to thrive. He calls us to reconsider the audacity of sustainable freedom and what it would take to restore it. "In the end," Guinness writes, "the ultimate threat to the American republic will be Americans. The problem is not wolves at the door but termites in the floor." The future of the republic depends on whether Americans will rise to the challenge of living up to America's unfulfilled potential for freedom, both for itself and for the world.

What listeners say about A Free People's Suicide

Compelling book. Guiness does an admirable job in reviewing America's great freedom experiment: How it was foundational to the origin of our country; how from its origins American freedom would have to be carefully governed in order for it to not only thrive, but survive; and how we've gradually distanced ourselves from our Founder's underlying conceptualizations for freedom's flourishing and protection.

Guiness describes the Founders' beliefs about freedom with a symbolic metaphor that he refers to as the &quot;Golden Triangle of Freedom&quot;- &quot;Freedom requires Virtue, Virtue requires Faith, and Faith requires Freedom&quot;). In other words, with great freedom comes great responsibility, given that perhaps the greatest enemy against freedom is freedom itself.

He describes how there are external threats to freedom, but the internal threats are perhaps just as dangerous, if not more. In the words of John Milton, &quot;License When we Cry Liberty.&quot;
America is currently at a crossroads where the self-destruction of our country's most noble and lauded virtue hangs in the balance. America's beliefs about freedom today are not only a distortion of the Founders' conceived, but our current beliefs have fractured very fabric of freedom that our Founders fought so hard to instill. The only question is what is America's next move? Will we mend freedom's fences and secure its borders, or will we move further towards freedom's outright destruction. Highly recommended read.

Completely pertinent and true to form.

This book is absolute truth in absolute terms, one that will be difficult to follow be at the self-serving nature of mankind to always put oneself above others.

Guinness explains the difference between unrestrained and restrained freedom. One person's unrestrained freedom is another's slavery. Our republic is neither ancient nor stable. A toddler with unrestrained freedom grows up to be a bully. The founding fathers knew the difficult work required of our young nation if we were to survive. Freedom is hard to win but harder to maintain. Unless both it's people and it's government voluntarily agree to restrain themselves from the lure of unrestrained power, we will fall just like all the other great empires before us. Even the word "empire" is not a title to which we should attain. That would annihilate our great representaive republic in the first place, just like Rome. Each chapter is given an ultimatum ending in "unless..."
I wish that every citizen and government official would read and understand the principles of this book. Eye-opening. Loved it.

Every freedom-loving American should read this book and suggest it to each politician now holding office or aspiring to do so. Os Ginnis laments the decline of the American empire but gives hope to all willing to heed history and what can be done to renew our democratic republic before its swift demise. The last chapter is just must reading, if you do nothing else with this book. Consider passing it on to every member of your local and national leaders.

this book is a gem. it is a call to those who love America to let their love be known and felt an experienced. it appears that America's future as a republic built on Liberty in the greatest sense is in jeopardy. this book is very helpful on answers. I highly recommend it

Any person claiming to be an true American needs ro read this book. Freedom is not free

On point. Freedom is not easy and requires cultivation through virtue and faith! Yet how to do so is almost unknown today. America needs this book.

Simply put: every American who loves his/her country must read this book. Guinness' perspective, as an observer/resident alien, is profoundly important and unbiased.

You may not like what this book has to say, but you will be glad you have read it and are aware of the issues it raises.

If you value America and true Freedom...

A must read for thinking Americans. The questions must be answered by us all and the time is upon us to act.