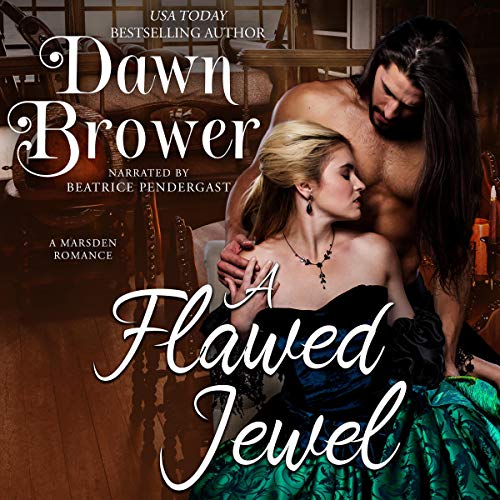 By: Dawn Brower
Narrated by: Beatrice Pendergast
Try for £0.00

Pieretta boards a ship, unaware that Thor is waiting to kidnap her for revenge against her grandfather. Will love intervene, altering both their courses?

Pieretta Carlyle experienced the loss of her father, leaving her alone in the world except for her grandpere, Comte Renard Dubois. The comte insists that she travel to France to live with him. Pieretta doesn't want to leave Charleston and the only home she has ever known. Her grandpere is her guardian, and she must do what he says.

Thor has a score to settle, and Pieretta is the key to his revenge. He became a pirate unwillingly after his business partner tried to murder him. He must acquire Pieretta by any means necessary, and he doesn't mind plundering a ship to obtain her.

When Pieretta and Thor meet, they are instantly attracted to each other against their better judgments. Pieretta is disgusted by the pirate's actions. Thor knows what Pieretta believes, but proceeds with his plans anyway. She is only a tool to achieve vengeance. What happens will depend on Thor's need for revenge and Pieretta's ability to forgive him for his dastardly deeds.

What listeners say about A Flawed Jewel

i really loved everything about this story! i honestly can't find any thing to complain about! i would highly recommend listening to this one!

What was one of the most memorable moments of A Flawed Jewel?

Pirates novels have never been one of my favorite romance genres but this novella was a great audiobook. I enjoyed every minute of this audiobook.

I looked forward to this book, was was disappointd in the presentation. The false southern accents drove me mad and in some cases it seemed to be read by rote instead of with feelilng or belief in the script. The story itself had a good feel and in other circumstances I would probably enjoyed it.

I need to hear more to really review.

To tell the truth this is the first Historical fiction seriers that I have listened too. AND my first time listening to Author DAWN BROWER.

Not sure if its really for me, but I am going to listen to the rest of the series.

It's a good story about a snobby upper class lady and a out for revenge pirate.

If you like Historical fiction you'll probably like it. I just have to listen to more to find out if its really for me.

At speed 1.50x the vocal artist did really good.

I have to admit, I'm giving up on chapter 4. The story seems to be ok, but the southern accent for the female wasn't good. But the voice for the male lead is what tipped the bucket for me. I finally realized what the voice sounded like - Duddly Doright (only the older fans will recognize this). Once I had that in my mind, I couldn't finish the book.

Enjoyable listen with a few twist and turns

The author brings you mystery, danger on the high seas along with death, evil and betrayal. The characters are a little confused at times as the author spins a tail pulling the reader in watching the characters dance around feeling for family, friends and each other. It all comes to an end with some surprising events that truly open the eyes of the main characters. I thought this was a delightful story not one of my favorites but still a very good plot, well thought out, with wonderful characters that you come to like very much. There are a few surprises that we the listener work out but still have to wonder until the end.

There were parts of Ms. Pendergast narration I found very enjoyable but others that I did not. I enjoyed her natural voice I truly loved her accent. I enjoyed some of her character voices I thought she really got into the character not only in tone but in emotion. I found her tones to be pretty even. There were no places where the volume was higher or lower than any other place in the book. I had no trouble feeling the emotions of the characters even if I didn’t like their voices. If any breaks were taken I could not tell. There was no place where the volume changes it stays the same throughout. There are no repeating of words, it is a very clear and clean audio. Her delivery was great and her performance was good. You always knew who was talking and just what they were

Be swept away by this tale of kidnapping, for revenge on the man, his business partner, who tried to murder Thor, Thor kidnaps Pia, the granddaughter and goes about fulfilling his act.

No one reckoned on the attraction between the two

Pia is an enchanting young girl. Knowing her own mind and determine to get it until she is kidnapped by a rogue. Full of hate and wanting revenge, Thor is determine to make her grandfather suffer. The heart doesn’t always follow the path the mind wants. An exciting love story by Dawn and Beatrice Pendergast's narration makes it come to life!

This story was filled with adventure and love. It had some laugh out loud moments that was quite fun. I always love a good love story.

This is a fun adventurous story of revenge. The story moves at a great pace and keeps your attention throughout. Great story line!!

DNF 36%
This story came across as if written like a children's story to me. The narrator seemed overly dramatic, too. Piaretta was too empty-headed to be of interest to me.