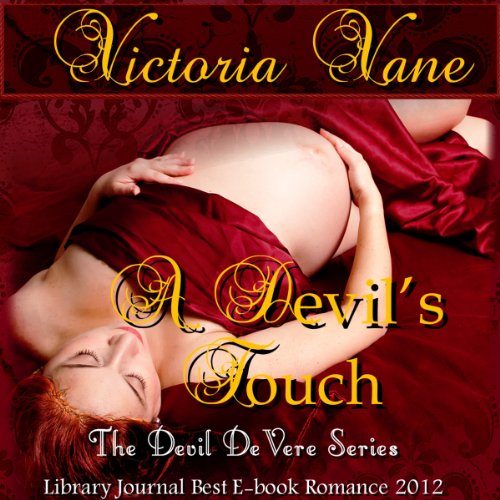 In her last month of pregnancy, Diana, Viscountess DeVere, has barely settled into her new life and role as "the devil" DeVere's wife, when her increasingly restless husband receives an urgent summons to London. When Diana inadvertently discovers a message he received from a known courtesan with whom he was formerly linked, she fears her marriage is over before it has begun.

They were barely three months into a marriage that had begun on rather shaky ground. Was it possible that for him, the novelty of it had already worn off? This had always been Diana's greatest fear, for Ludovic was a man with a voracious sensual appetite, one he had honed with years of endless variety and constant, unrestrained indulgence. Diana, on the contrary, had known only one true lover-this same perplexing man who was now her husband-the one who had made her heavy with his child…and now left her alone in a cold bed.

What listeners say about A Devil's Touch

The narrator was awful!

I've enjoyed reading this book in its 3 parts. Today I listened to the third for the first time and didn't like if at all. The narrator ruined it for me.

A Great Addition To The Devil DeVere Series

What made the experience of listening to A Devil's Touch the most enjoyable?

It was knowing what happened to DeVere and Diana after "The Devil's Match". Looking at the cover didn't hurt either.

What was one of the most memorable moments of A Devil's Touch?

It was when DeVere met a special person in his life for the first time.

What does Eva Hathaway bring to the story that you wouldn’t experience if you just read the book?

She has you feeling as if you are listening to the actual person (if they really did exist). If she didn't have a way of changing her voice and adding accents, I don't think the listening experience would be as great as it was.

It was when DeVere wanted to continue his relations with his wife and asked the advice of a doctor. Not liking the answer he then goes to his friend for advice. How times have changed :)

This book was a great way to end this section of the Devil DeVere series. There's a little bit of tension, some jealousy, and ends with a happy ending. Loved it!

There's not much to this one... except that it sets up the next which is Simon and Salimes story. It's like an afterthought to make up for the myriad of order and editor errors that abound in this series! Sad to say it isn't much of a story... it brings the doubts in Diana and DeVeres relationship to its climax (double intendre intended). That's it... those 2 things ordered and tada it's done! THE EPILOGUE FROM THE PREVIOUS BOOK BELONGS TO THIS 'BOOK'!

CREDITWORTHY? Pay for it if you must, it costs less than a credit.

HEAT FACTOR: Sexually explicit... with a pregnant Diana and rather talented DeVere...

This was a novella set shortly after the end of The Devil's Match. I enjoyed it, but not as much as Diana and Ludovic's other books. In this story there is a misunderstanding that leads to doubts and fears on Diana's part. Her doubts and fears anger Ludovic, making him prove her trust. I think perhaps it was this that bothered me most in the story. When he should have been supporting her most, he was pushing her limits. But that could be the midwife in me, I am probably always going to side with the pregnant mom. It worked for them though and they were happy in the end. The audio of this book was quite good as well. And I have to say that this cover is just beautiful!

I would like to thank the author for providing me with a copy of this audiobook to review.