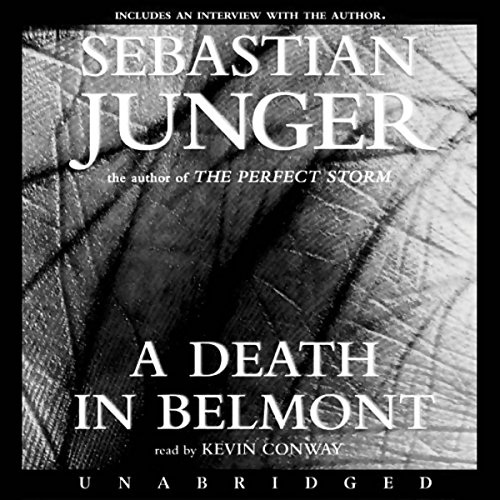 A Death in Belmont

A Death in Belmont

In 1963, with the city of Boston already terrified by a series of savage crimes known as the Boston Stranglings, a murder occurred in Belmont, just a few blocks from the house of Sebastian Junger's family, a murder that seemed to fit exactly the pattern of the Strangler. Roy Smith, a black man who had cleaned the victim's house that day, was convicted, but the terror of the Strangler continued.

Two years later, Albert DeSalvo, a handyman who had been working at the Jungers' home on the day of the Belmont murder, who had often spent time there alone with Sebastian and his mother, confessed in lurid detail to being the Boston Strangler.

By turns exciting and subtle, A Death in Belmont chronicles three lives that collide, and are ultimately destroyed, in the vortex of one of the most controversial serial murder cases in America. The power of the story and the brilliance of Junger's reporting place this book on the short shelf of classics beside In Cold Blood and Helter Skelter.

"He's a hell of a storyteller, and here he intertwines underlying moral quandaries....This perplexing story gains an extra degree of creepiness from Junger's personal connection to it." (Publishers Weekly)

What listeners say about A Death in Belmont

I went into this book cold, no idea who the Boston Strangler was or of any of the murders. The book contains a good deal of background information but for the most part it is interesting and presented well. The story is extraordinary enough to sell itself, but Junger does a good job of laying it out and keeping your attention. A good audiobook lets you escape for a while and this is definitely one of those. Excellent narration work by actor Kevin Conway, too.

I am a criminology doctoral student who has studied serial killers, as well as a former journalist. This book is an excellent telling of the complexities such a gruesome and controversial set of crimes can create. It is personal, compelling, and rigorous in its facts. The narrator brings gravity to the tale without weighing it down. Overall, both story and performance are well worth your time and money.

This piece of writing immediately grabs the reader and doesn't let go until the end. Though provoking and well researched.

Would you listen to A Death in Belmont again? Why?

I am a novelist but will soon attempt a foray into true-crime writing. I rarely listen to books more than once. This one would be an exception because it's so loaded with details and other paths to follow.

There's nothing more compelling than the truth. This story is true and scary. I was very impressed with the amount of research and personal exploration the author undertook.

Which character – as performed by Kevin Conway – was your favorite?

This was an excellnt book that broke all the rules that say you must start from your conclusion and then write a book to support that idea. This book takes you on a jorney adn a thought process that is well worht the trip.

Sometimes an event is a lens into an entire culture. Sebastien Junger's account of a serial killer in Boston, follows the threads into the Deep South, the New England immigrant communities, and the workings of pre-CSI police forces. Junger has a personal connection to the event, since the killer worked briefly for the family. It's an engaging book that doesn't try to solve what is still a partially unsolved case.
Like Junger's previous book The Perfect Storm, A Death In Belmont follows the case from the first murder through the ninth, and on into several trials. One trial bizarrely ends in the midst of national shock at Kennedy's assassination; felt even more in Boston where Kennedy had been a senator.

The author did a great job of telling the story, giving the facts and entertaining the reader. I was truely impressed.

this is about a serial killer?

to me. this was all about politics, the Kennedy assassination and equal rights. money wasted.

Kept us intrigued the whole way. Loved the evenness of the story telling about each character. Will recommend to others

I enjoyed the interview of Sebastian Junger and his description of the depth and breadth of research into the book.

I was moved by the link to the civil rights and criminal justice issues to the murder of Bessie Goldberg. The descriptions of the Southern home town of Roy Smith gave a good backdrop for his personal history and a glimpse into the post WWII Jim Crow South.