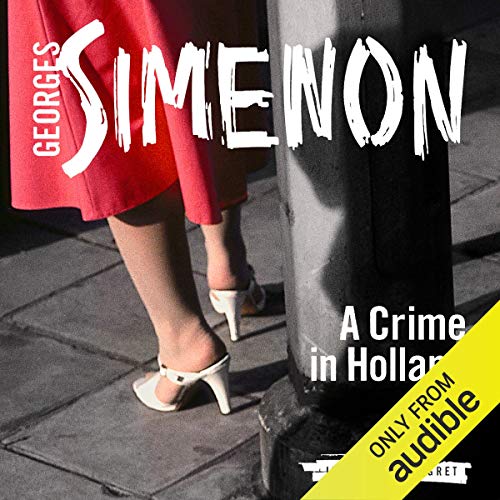 A Crime in Holland

A Crime in Holland

When a French professor visiting the quiet Dutch coastal town of Delfzjil is accused of murder, Maigret is sent to investigate. The community seem happy to blame an unknown outsider, but there are people much closer to home who seem to know much more than they're letting on: Beetje, the dissatisfied daughter of a local farmer; Any van Elst, sister-in-law of the deceased; and, of course, a notorious local crook.

"Compelling, remorseless, brilliant" (John Gray)
"One of the greatest writers of the twentieth century... Simenon was unequalled at making us look inside, though the ability was masked by his brilliance at absorbing us obsessively in his stories" ( Guardian"A supreme writer... unforgettable vividness" ( Independent)

take a train journey through the North of The Netherlands and listen to the book whilst gazing out of the window. Enjoyable and relaxing...

Maigret himself. Although Simenon is a master at making his characters come alive with the minimum of words, it is the main man himself that is developed best throughout the series, including this one.

Different voices for different people. Small note of criticism, - Gareth Armstrong can be forgiven for not speaking Dutch, but I would have thought the production team and the narrator would have verified how to pronounce the Dutch words spoken here and there in the book. I do speak Dutch and spend quite a while figuring out what he was on about.

It is not the kind of book really to be "moved" by.

As usual with Simenon, in my opinion, the "detective element" is the authors device to tell the story of a human drama in a close-knit community, and that seeking justice is not always what everybody wants.

"What time is the next train to France?"

Would you ever listen to anything by Georges Simenon and Sian Reynolds (Translator) again?

Yes, though I thought the translation was too modern in its idiom, and the best parts of the novel are its historical, as well as geographical, setting.

I don't particularly like the Dutch voices being in a heavily accented style (Maigret, in this context) is rightly left in unaccented English).

Did A Crime in Holland inspire you to do anything?

A Crime in Holland dates from 1931, the same year that the first of more than a hundred Inspector Maigret novels, The Case of Pieter the Lett was published, though written in the 1920s. A Crime in Holland is set in the very small Dutch town of Delfzijl, which was apparently where Georges Simenon wrote the earlier and, as it turned out, ground-breaking novel. Curiously, in 1966 a bronze statue of Maigret (not Simenon) was erected in Delfzijl but it is rarely mentioned in guidebooks.

A Crime in Holland is also a curious novel because, with very little justification, Maigret travels from Paris to the northern coastal town of Delfzi in response to a visiting French academic being detained in connection with, though not accused of, the murder of a lecturer at a local naval college. The narrative point of view adopted is odd, too, with Maigret credited with the solving of the crime intermittently throughout the story (“it would turn out that …” and such statements). What works better, though, is the setting: a slow, quiet place with the canals (one almost disused) and the nearby sea creating an impression of a township on the edge, almost overlooked, even though trade is going on. However, it is hardly a "picture book town". The Crime at Lock 14 (another from 1931) has a similar setting and atmosphere and maybe Simenon was experimenting and giving Maigret space away from the business of Paris to develop as a detective who is barely reliant on procedure and definitely not on violence to solve cases or at least to understand what is happening. That Maigret speaks no Dutch and only a few characters in A Crime in Holland speak French adds to the feeling of a place out of time. The Poirot-like wrapping-up seems like an early effort at handling the backward-telling structure of the detective story. I’d need to re-read more of the later Maigret books to see whether the slightly prurient and certainly dismissive tone adopted towards female characters finds an early expression in this novel.

First Simenon, but DEFINITELY not the last.

This is a great little treasure of a tale. Simply told, and straight forward. Yet it lacks none of the vital ingredients of a great crime story. Wonderfully read by Armstrong, Simenon's writing is taut and enthralling, and hits the ground running, never letting go until the end.

I am looking forward to building my Maigret Collection, though possible not necessarily in numerical order.

As always the scene is vividly and succinctly set. The characters are real with their human weaknesses and foibles. However, this book seemed more contrived than usual.

Maigret investigates a killing in Holland

Terrific tale of a crime in a small northern Dutch town near the North Sea. Has some elements of an Agatha Christie novel.