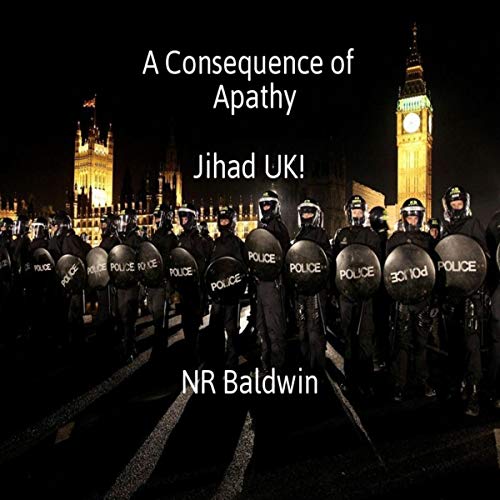 A Consequence of Apathy: Jihad UK!

By: NR Baldwin
Narrated by: Charles Robert Fox
Try for £0.00

A Consequence of Apathy is a dystopian novel set in a Britain that has been brought to its knees by a recession and ethnic tension. It follows the lives of four friends as they try to find a way out of poverty without getting caught up in racial violence. It also follows the government's efforts to contain radical Islamist's attempts to take over urban areas by force and a brutal group of military vigilantes who have taken the law into their own hands to try to stop them.

The story considers the repercussions of a violent and vigilante society and peoples’ reaction. It follows political attempts to deport radicals, and the story culminates in a hunt for the vigilantes and a look at how communities react to deportations and austerity.

NR Baldwin was born and raised in Kendal, Cumbria. After a long career in the military where he experienced active service across the globe, he now works as a security advisor overseas.

A Consequence of Apathy is Baldwin's first novel. He has always been interested in British Northern culture and spent 18 months researching his novel, living and speaking to different communities and interviewing the police and health services. Of A Consequence, Baldwin says: “It a flight of fancy set in the near future. I am really trying to explore what would happen if the infrastructures we take for granted disintegrated and how different sections of society would respond and adapt. We have a choice today to make sure that events like those imagined in the book never happen. I believe we should take that choice.”

What listeners say about A Consequence of Apathy: Jihad UK!