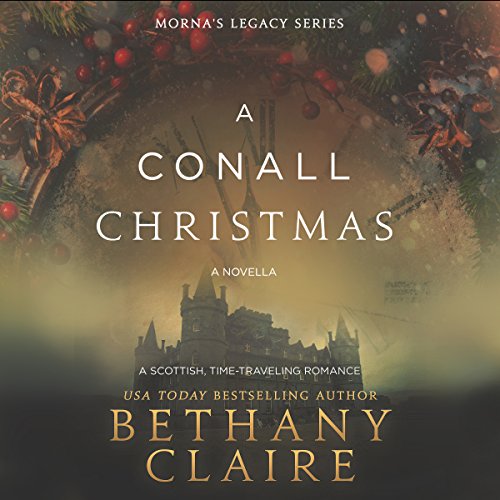 A Conall Christmas: A Novella

By: Bethany Claire
Narrated by: Lily Collingwood
Try for £0.00

It's Yuletide at Conall Castle. Christmas is quickly approaching, and Adelle is determined to make this Christmas the best one Conall Castle has ever seen, but loneliness haunts her. Love for her daughter sent her into the past, but she'd not expected the isolation she would feel. A former socialite and serial dater, she finds that her current age seems much older in the 17th century than it did in the 21st. She resigns herself to the fact that she will remain single for the rest of her days. At least until an unexpected visitor arrives at the castle.

Hew Moray has spent the last 20 years all alone, only leaving his isolated home once a year to pay homage to the wife he lost long ago. When a winter storm causes him to seek shelter at the castle where his sister lives, he meets the first lass since his beloved Mae to make his heart flutter in his chest once again. Will he be able to release himself from his past grief to allow another love to enter his life? If he does, will his love be returned?

What listeners say about A Conall Christmas: A Novella

this was a great short story but a little pricey. I really did enjoy the storyline.

This is a novella part of the greater Morna legacy series, great characters and I love how the author blends the past and present Christmas traditions.

​A Christmas Short with Ageless Love!

Recommendation:
Yes! Though listed as book 2.5, you can read A Conall Christmas as a standalone, I would not however, suggest it. Read it in order and you’ll understand far more of the background story.

After two novels about the younger generation, it’s finally Adelle’s turn! Hew, Mary’s brother, is on his way past Conall Castle and stops to get out of the cold. He soon bumps into Adelle. Hew’s history left him shy and tentative to form new relationships, but Adelle’s infectious attitude and modern views soon had him intrigued.

For a short story, Adelle was the perfect main character. She’s an integral part of the Morna’s series but not such a core character that she would need her own full length book. The standard “it’s a short story so the love was super instant and feel rushed” issues are there but if you’re aware and accept this the story is very enjoyable. The characters have wonderful chemistry, charming interactions, and of course the Christmas theme was delightful.

Audiobook Review:
Lily Collingwood is, as always, wonderful to listen to and her voice shines in Adelle’s parts. In the first book her performance was not what I was expecting but as she’s grown into the roles her diverse voices and the level of quality has increased and constantly makes me smile while listening. The short was three hours and fit perfectly in the to and from work commute. As usual, the recording quality was great with no hum or distortion and made the entire focus on the story.

I so with Lily Collingwood,the narrator,had pursued a career as, say, an accountant. She might prefer soap opera actress

Would you be willing to try another book from Bethany Claire? Why or why not?

Such breathiness, such unnecessary drama of inflection. She's better with male characters,actually with dialogue in general;it's the narration in between that just *nails on chalk board*

Good and Easy. Nice story of Adelle, Bri's mother, finding love. Not so explicit in the bedroom which I appreciated. Only negative is Scottish accents sounded Irish. Voice of Hew I liked very much. Bri's voice too flat.

This is a great Christmas story, I love the time-traveler. But what I enjoyed most is the woman in the story is not a young heroine but a woman who is about to become a grandmother. Great romance for us older women.

This was very pleasant, a good Segway to the next book. very well narrated. Short and sweet.

Really enjoyed the personalities in this quick fun read- laughed out loud more than once! Could have done without the love scene- TMI- I get it!

Adelle is a woman who came back in time from the twenty-first century. Hew is a widower from the seventeenth century. They meet and they instantly feel attracted to each other!!!

The only thing is that Hew is so painfully shy that he keeps to himself just to be able to function in life. But he soon learns how to overcome his fears because he falls in love with the kind, confidently extroverted, outspoken, Adelle. Hew, after he has fallen in love with Adelle, is NOT shy in expressing how much he loves with his whole heart!! This is the sweetest 'new love' story!!!

This story touched my heart, being a painfully shy person before I was also able to overcome my fears to become the outgoing person I am today. There I hope for us all, no matter what we may struggle with . . .

Even the Middle Aged find love

Would you listen to A Conall Christmas: A Novella again? Why?

What was one of the most memorable moments of A Conall Christmas: A Novella?

When they decorated the Christmas tree

Which character – as performed by Lily Collingwood – was your favorite?

This book was enjoyable but didn't bring on the tears that some of the others in this series have done. This was just a nice cozy story without the highs or lows of the other stories