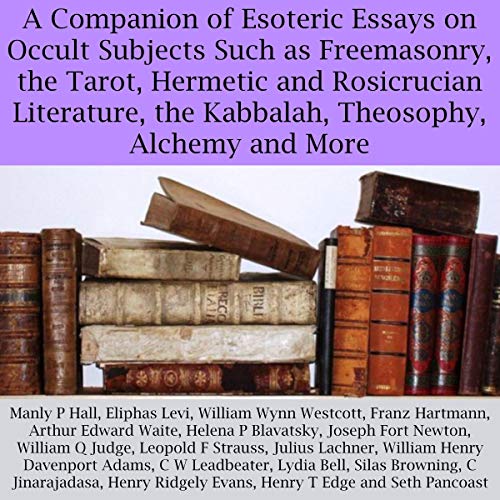 A Companion of Esoteric Essays on Occult Subjects Such as Freemasonry, the Tarot, Hermetic and Rosicrucian Literature, the Kabbalah, Theosophy, Alchemy and More

This is a collection of 21 essays on a variety of occult-themed topics, covering the full spectrum of classic esoteric and related subjects, which include Hermeticism, alchemy, magic, the Kabbalah, ancient wisdom and philosophy, the Tarot, Rosicrucianism, Freemasonry, Theosophy, and spiritualism, by some of the most notable and prominent names in the history of those subjects.

This collection was compiled specifically with the student in mind. The contents include:

What listeners say about A Companion of Esoteric Essays on Occult Subjects Such as Freemasonry, the Tarot, Hermetic and Rosicrucian Literature, the Kabbalah, Theosophy, Alchemy and More

Just what I was looking for. I kept going back and listening to it and as I continued my study I heard things that I missed from my first & second time.

Love the Book Not a fan of the Reader voices

The reader voices got a little irritating. The females voice was great- but the man sounds like his nose is clogged and made me have to rewind a few spots.

this was a very good collaboration of information for any esoteric reader. I found it very insightful.