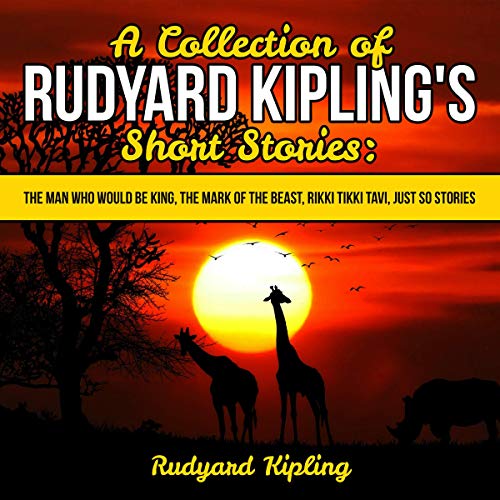 A Collection of Rudyard Kipling's Short Stories: The Man Who Would Be King, The Mark of the Beast, Rikki Tikki Tavi, Just So Stories

By: Rudyard Kipling
Narrated by: Matthew J Chandler-Smith
Try for £0.00

Joseph Rudyard Kipling was an English journalist, short-story writer, poet, and novelist. He was born in India, which inspired much of his work. Kipling's works of fiction include The Jungle Book (1894) and many short stories, including "The Man Who Would Be King" (1888) - a story by Rudyard Kipling about two British adventurers in British India who become kings of Kafiristan, a remote part of Afghanistan; "Rikki-Tikki-Tavi" - a short story in the 1894 anthology The Jungle Book by Rudyard Kipling about the adventures of a valiant young mongoose; and "The Mark of the Beast” (1890) - an early horror fiction piece.

Kipling was one of the most popular writers in the British Empire, in both prose and verse, in the late 19th and early 20th centuries. Henry James said, "Kipling strikes me personally as the most complete man of genius, as distinct from fine intelligence, that I have ever known." In 1907, at the age of 42, he was awarded the Nobel Prize in literature, making him the first English-language writer to receive the prize and its youngest recipient to date. He was also sounded out for the British Poet Laureateship and on several occasions for a knighthood, both of which he declined.

He is regarded as a major innovator in the art of the short story. His children's books are classics of children's literature, and one critic described his work as exhibiting "a versatile and luminous narrative gift". In the wake of his daughter's death, Kipling concentrated on collecting material for what would become Just So Stories for Little Children.

What listeners say about A Collection of Rudyard Kipling's Short Stories: The Man Who Would Be King, The Mark of the Beast, Rikki Tikki Tavi, Just So Stories

Such an awful reading I couldn't get past first few pages

See above... Really butchering a beautiful book with an terrible narrator. Very sad, do not buy.

I love the stories. The man reading is not the best. There’s a weird rhythm when he reads, not like a normal English speaking rhythm, and his intonation is strange. It’s distracting when you’re trying to enjoy the story. Hopefully they’ll redo this with a better reader.