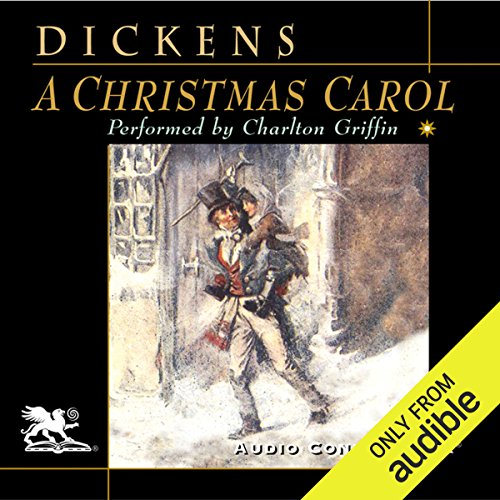 The spirit of Christmas has never been captured better than by Charles Dickens' masterpiece about Scrooge, Tiny Tim, Bob Cratchit and all those wonderful spirits, especially the ghost of Jacob Marley. It can be fairly stated that Dickens was so successful with A Christmas Carol, that his characters have become more well known than the title itself. In no other work of his has the recurrent them of social injustice and poverty been more powerfully and economically presented.

Although the book is only about 100 pages in length, its compact plot structure and wonderful narrative velocity are so perfectly contrived as to make this novella an icon in world literature. Once the story begins, there is no getting off this mad dash around the fog beclouded city of gloomy London.

The story was written in 1843 in the wake of a series of "poor laws" directed at changes in the British welfare system. Dickens tried to alert his readers to the plight of those persons who had been displaced and driven into poverty as a result of the rapid changes taking place during the early years of the Industrial Revolution.

In A Christmas Carol Dickens points out that the wealthy have a greater obligation to the poor than to merely pay their taxes and go on about their lives. But the greatest thing about the story is the powerful spirit of Christmas, and the healing virtue of believing in something outside of one's self.

What listeners say about A Christmas Carol [Audio Connoisseur Version]

A timeless classic from the father of humanity

A lesson from history for the future betterment of all of mankind. God save us.

terrible narration ruined a wonderful book .I struggled to finish it . I chose another version for next time

Prefer this to the other version I own

I purchased this as my "seasonal cheer". While the story focuses on Christmas, its message is for the whole year.

Just a few days after buying this version, audible.com gave me a copy of the Tim Curry version. I have listened to both, and of the two I prefer this one.

Both are decently read. To me the Curry version reminds me of a grandfather sharing it with a child just learning to read --- slow and deliberate like he's letting the child point out words on the page as they go. To my taste, this version is narrated more smoothly, and the reader is more intent on communicating the story.

Most of us probably already know the story or at least a version of it. So the delivery is what counts. Different people will have different preferences.

The plot may not suit people who feel "Scrooge-like" at this season, but for others, it is heartwarming. Given how long ago Dickens wrote A Christmas Carol, it is amazing how little of it seems dated. Its style is more leisurely and observant than it would be if written today. But the author's observations and asides rarely feel intrusive or dated.

I'm happy with my choice

I listened to all the samples on this book and they all sounded great to me. I chose this one because there were some sound effects that I didn't hear in the others. I was thrilled with my choice. The narrator was amazing. Many times I thought there was a cast of characters but it was just one man. I think I would have liked any of the narrators but I loved this one. I listen to many books but this is my first review.

an excellent rendition of a Timeless Tale. the narrator has a perfect voice for it and the musical accompaniment is just right

The Greatest Of All Time

Not bad at all

Sound effects are a bit cheap sounding ch aracter voices are OK, and help distinguish between the different members of the story. A Christmas Carol is a classic for a reason.

I love this story of repentance and redemption. Narration was wonderful with some music and sound effects that added to the story telling.

Little Fan's voicing is the stuff of nightmares

I listen to the audio version of this classic Dicken's tale every year. Usually I listen to Simon Prebble's version but I had a copy of Grifin's version I hadn't listened to in years and thought I'd switch things up. Griffin's voice is generally quite good, BUT he unfortunately does the most horrendous, artificial little girl's voice for Scrooge's little sister Fran that I had to stop listening. I've listened to this version several years ago and somehow had forgotten how terrifying Griffin's children's voices are. Simon Prebble's version is significantly better.

Everyone should read this among all the other classics.

If you’ve listened to books by Charles Dickens before, how does this one compare?

I am not a Dickens follower, but I find this typical of his other books in that he identifies a personality or type and tells us we should try not to be like that.

Which character – as performed by Charlton Griffin – was your favorite?

Griffin is wonderful. You don't realize that one person is doing all this. I like the voice of naration best. Scrooge was also outstanding.

One has seen it so many times--

I think Dicken's message is that if we dislike someone he must be bad. I don't buy it. I don't think a real Scrooge could be as flat as C.D. makes him.

Would you listen to A Christmas Carol [Audio Connoisseur Version] again? Why?

I read or listen to this story at least once a year -- at Christmas, of course. It is an excellent reminder of just what the season is about.

Scrooge goes through such a transformation during his experiences. Through his story, we can learn to think about our actions (and how we lead our lives) in a different sort of way.

Excellent, but for the female voices

A wonderful story in its purest text, and a truly stirring performance. Except... whose bright idea was it to digitally pitch up the reader's voice for all the women and children? When I first heard Scrooge's little sister Fan I just about spat out my soda. She sounded just like Simon from those old Chipmunk cartoons.
But if not for that directorial blunder, I would give it five stars. As it is, still well worth listening too.