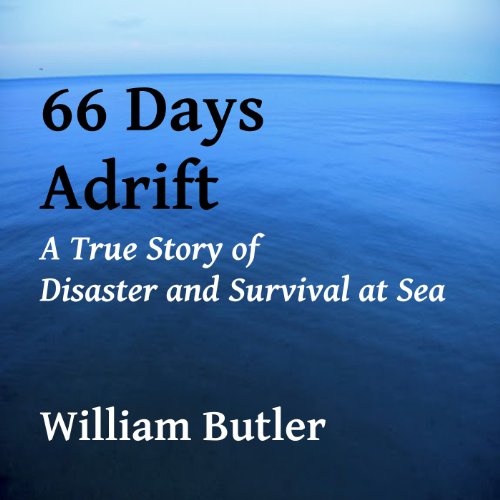 By: William Butler
Narrated by: Nick Hahn
Try for £0.00

The lure of paradise was unmistakable, and Bill Butler was on a quest to find it with his wife Simonne - riding the Pacific currents on their sloop Siboney, with a world of possibilities ahead. But,1200 miles from land, the alluring ocean showed its deadly side when, without warning, a pod of pilot whales attacked their sailboat, battering it until it sank beneath the waves.

The dazed couple was left drifting in midocean in a leaky six-foot raft meant for coastal waters, with only a few hastily grabbed provisions to sustain them. Simonne, who had never truly shared Bill's dream of circumnavigating the globe, blamed him bitterly for their desperate plight.

In this powerful account of their 66-day odyssey, Butler tells a gritty, harrowing tale of their battles against nature, despair, and their own demons. He reveals how he and Simonne found the strength to survive despite the ravages of hunger, storms, and sharks. Based on Butler's faithful log entries, 66 Days Adrift is both a chilling cautionary tale for sailors with big ideas and an inspiring story of love, faith, and survival against long odds.

What listeners say about 66 Days Adrift

how was this released it sounds as though the narrator is speaking to an imbecile. He has a decent sounding voice but..he...reads...at...a...maddeningly...slow...pace.

This was an enjoyable story, very tense at times as you'd expect, but with a focus on marital and religious difficulties.

Bill comes across as a slightly bungling character, not your typical survival hero like Shackleton or Callahan, and even believes he can communicate telepathically with his family. When not in the grip of a violent mood swing his wife Simone seems the most level-headed.

Religious folk will probably enjoy the couple's "spiritual journey" in which God "tests their faith" and "delivers them to safety". Bill ruminates on the subject extensively, and in the process is unintentionally amusing. He gives thanks for natural changes in wind direction and proclaims it a miracle that none of the sharks which terrorise the raft by day and night have yet succeeded in eating them.

Really interesting & emotional account of survival.
recommended. especially for anybody who spends time at sea

Honest. Brutal. Inspiring. A great bedtime listen with slow, clear narration that is easy to fall asleep to and pick up easily. An inspiring read even for us non-sailors.

On balance not bad but

The constant mention of God was off putting and the priest meddling in the marriage was just too much.

really a riveting true story, and an incredible tale of real survival. um... but I was not a fan of the voice performance. my gf heard it, and initially thought it was a done by a text to speech synthesizer. Despite my unhappiness with the voice narration, I was unable to stop listening because the story was so good. a must read in the genre of true survival.

66 Days Adrift is an edge of your seat tale that kept me interested until the very end. That being said, I had a real struggle with the narrative. I felt like I was being read to by a teacher or classmates in middle school rather than a voice actor. Words were mispronounced, pauses at inappropriate times caused confusion, and changes in recording levels after the narrator obviously took a break didn't do justice to the story. Also, the dry-mouth smacking from time to time drove me nuts.

There are no atheists in fox holes or rafts apparently. Be prepared for heavy religious overtones throughout. If you’re looking for a better book on the same topic check out Callahan’s book Adrift.

I rolled my eyes at a lot of the prayers throughout but that wasn’t my biggest problem. Nor was one of the MCs constantly berating the other for paragraphs at a time. My biggest complaint is Nick Hahn’s performance. I had to up the speed to 1.2x to get any kind of excitement or cadence, other wise it was as if he had a mouth full of peanut butter. Finally the coup de grâce his wet mouth sounds. You can hear every lip smacking syllable throughout the entire reading. To say it was off putting is about the kindest way I can describe it.

I’m going to return this, and I’ll avoid any other performances by Nick. Shoutout to Sailing Stories podcast which is where I found out about this book.

I am obsessed with true survival stories and this one does not disappoint. The narrator's cadence is odd and better at 1.25 speed but you get used to it. Not a reason to not hear this story. I'm sure it would be amazing to read as well.

This is one of the worst books I've ever had the gross misfortune to have read! Butler should sue his writers class for malpractice! He should have paid me not to buy this trash of a story. Thank heavens Audible allows returns because this puppy is going to the trash bin! I felt compelled to finish the book much as a rubbernecker slows down to witness a gruesome automobile accident. I had to see if it could possibly get any worse and surprise, surprise, it did! If I had had to share the same life raft with Butler's shrew of a wife, I think I would have had to toss her and her fat mouth over the side and let the sharks at her! She actually called him, among other things a "Dumb Monster". Hey, you can't make this up. The lazy narration was nearly as bad as the book! It sounded like Hahn was calling it in for a paycheck! Take my advice, leave this dog in the kennel!

I really enjoyed this book. I sped up the narration to 1.2x and he was then ok. Yes he didn’t have much inflection in his voice but I could understand him. The story was gripping. I can’t even imagine the daily horror and stress of being lost at sea, attacked by sharks incessantly, and being narrowly missed by so many boats. Very detailed and I really have to admire the thought process and intelligence of both survivors. Yes it was hard to listen to the incessant marital bickering but realistic.

transformative it takes you away

this story was wonderfully told oh, it was well written an inclusive educational experience-an adventure of peril at sea.

Sure to put you asleep

This story is ok but the narration is HORRIBLE. No voice inflection. No emotion. Every single time I have listened I have been put to sleep. Good luck.

The story SOUNDS amazing, but I just couldn't get past the narrator. I started and restarted it several times but just didn't like the way he read it.

Must read awesome tale and true

Love this book could not put it down so happy I found this amazing tale. Performance was awesome this is an absolute must read. If you like stories about the sea and survival you are going top live this as i did i was moved a couple times a least.