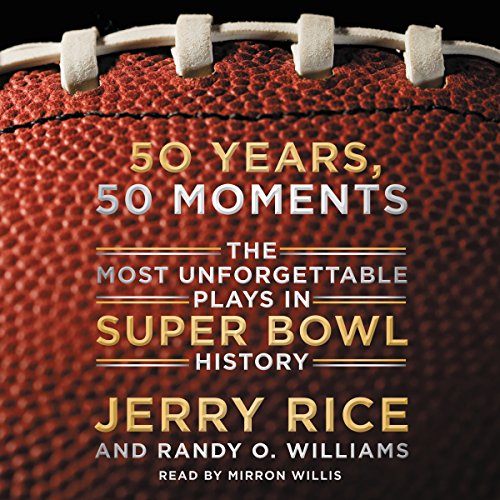 In commemoration of the 50th anniversary of America's most beloved sporting event - the Super Bowl - an authoritative collection of the most pivotal plays through the decades, compiled by the legendary Jerry Rice.

50 Years, 50 Moments celebrates five decades' worth of memories, insights, and personal experiences of Super Sunday. Super Bowl MVP Jerry Rice has compiled his list of the most iconic, strategic, and record-breaking moments in football history from the Super Bowl's inception to today - from the Green Bay Packers and Kansas City Chiefs in Super Bowl I to the amazing Miami Dolphins championship in Super Bowl VII that capped their 17-game undefeated season to the heart-stopping Super Bowl XXV, in which the New York Giants beat the Buffalo Bills 20-19 and Super Bowl XLIX's amazing last-second victory by the New England Patriots over defending champion Seattle Seahawks 28-24.

A Hall of Fame wide receiver who has played alongside and against some of the greatest players in the NFL, Jerry Rice, joined by accomplished sports researcher and journalist Randy O. Williams, draws on his intimate knowledge and insight of the game to highlight remarkable moments from this greatest game in modern sports. Rice's access to the NFL means that 50 Years, 50 Moments is chock-full of memories and insights directly from the athletes and coaches who were involved in these moments.

Pulling together all the catches, the interceptions, the fumbles, and the triumphant touchdowns that have made the Super Bowl an unforgettable experience, 50 Years, 50 Moments features marquee names like Joe Montana, Vince Lombardi, Roger Staubach, Walter "Sweetness" Payton, Terry Bradshaw, Joe Namath, Lawrence Taylor, "Mean Joe" Greene, as well as Tom Brady, and is a must-have keepsake for football fans everywhere that is sure to be treasured for generations to come.