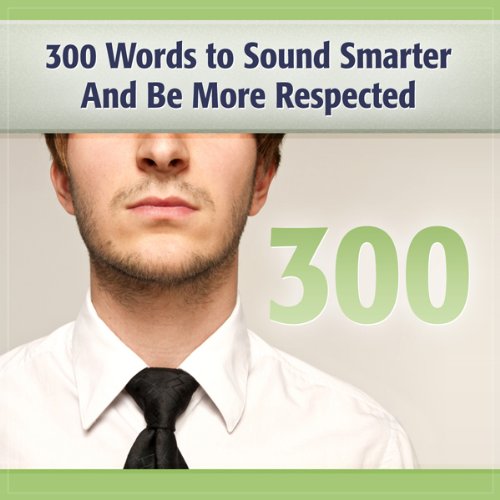 300 Words to Sound Smarter and Be More Respected

This title is laser-focused on making you sound smarter and becoming more respected by using a larger, more sophisticated vocabulary. Simply has systematically excluded words here that did meet this goal - words that are perfectly good in some contexts, but will not make you sound smarter. These include slang and popular-culture words, such as angst, avant-garde, Catch 22, kitsch, red herring, and white elephant. Then eliminated were those words whose meanings are often misconstrued, such as disinterested and complement/compliment. And finally, we eliminated were words that sound awkward in speech, such as accolade, baroque, epiphany, philistine, tete-a-tete, tryst, unrequited, and waft.

Included words sound appropriate in conversation, work seamlessly, and will not be interpreted as "show off" words. The final test was that the words had to be those that people nodded slightly at when heard, because they enhance meaning and do not elicit any slight grimaces. We worked hard to eliminate those grimace words!

I just wish there was an accompanying PDF of the lists in the download page.

Best way to improve your vocabulary!!!
I just turn this on every time I'm doing something a bit mind-numbing (cleaning out the closet, grocery shopping, etc...). And BAM!!!...I'm expanding my vocabulary the EASIEST way possible!
The book is split up alphabetically....a word is given, defined, & put in a sentence...Too Easy!
This is a MUST GET if there ever was one...it the "easy" way to learn!