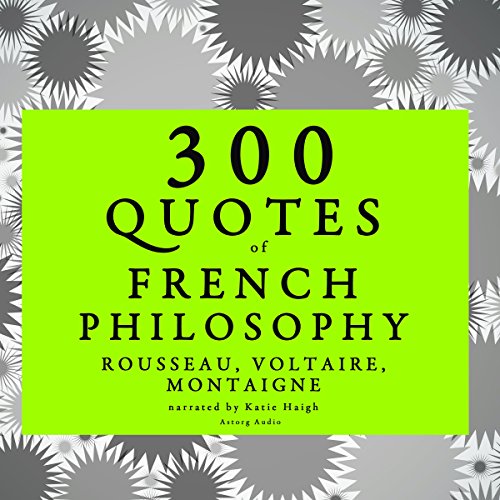 French philosophy has been led on by three most influent thinkers, each one bordering on literature and bringing new understandings to politics, philosophy, and religion.

Michel de Montaigne is known for popularizing the essay as a literary genre; his style merges casual anecdotes and autobiography with deep intellectual insights. His "Essays" are among the most influential ever written; one can recognize Montaigne's direct influence on great literary figures all over the world, from René Descartes to Nietzsche, Isaac Asimov, and possibly William Shakespeare.

Two centuries after him, Jean-Jacques Rousseau keyed the modern genre of autobiography, vastly influenced the development of the Enlightenment through his political philosophy, and helped develop modern educational thought, although his book on the question outraged the French parliament so much that an arrest order was issued against him.

His lifelong adversary Voltaire was a French writer famous for his wit and irony, his tools for launching vitriolic attacks on the established Catholic church, the adversaries of freedom of religion and expression, and on separation of church and state.

Each one of these great thinkers has had a tremendous influence on the rise and shape of modern thought. This audiobook is a careful compilation of essential quotes summarizing their fundamental ideas, for you to get acquainted with the subtleties of their works in a practical format that will add to your culture and understanding of modern philosophy.
©2017 Compagnie du Savoir (P)2017 Compagnie du Savoir

What listeners say about 300 Quotes of French Philosophy

Excellent quotes from the philosophical giants!!

What better way to spend your holiday, listening to some of the greatest advice from the best French thinkers of the past. The narration style and delivery was simply magnificent!! This would make a great gift for friends and family.