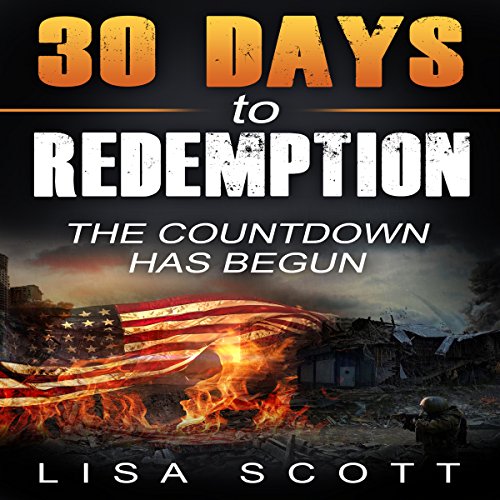 By: Lisa Scott
Narrated by: Tina Marie Shuster
Try for £0.00

The audiobook begins when Lissy wakes from a restful sleep. Her children, Natalie and Nathaniel, kiss her good-bye and leave for their first day back to college. Her husband, Glen, leaves for work right behind them. She continues on with her morning routine before she heads out to work as a nurse at their local hospital.

Lissy receives a disturbing phone call from her best friend, Carmen. Carmen tries to warn Lissy that meteors are headed straight for them. Their phone call is cut short. The power goes out.

Lissy races to get her children before the first meteor strikes. She catches up to Natalie and Nate. They attempt to take cover in an open field. A meteor strikes in close proximity to them, then another, then another. The impact causes an earthquake. The earth underneath them opens up and swallows them alive.

When they hit the bottom of the pit, Lissy inspects her surroundings with her kids firmly in tow. After crawling around in the dark for what seems to be an eternity, Lissy discovers a penlight in her pants pocket attached to her key chain. She clicks it on. They all crawl along in a very narrow passageway on their bellies until they find an opening to an elaborate cave system.

After much exploration, all three fall asleep. They are trapped, buried alive.

After a few minutes of unrestful sleep, Lissy awakens and stumbles toward a troubling light. It is an angel. He confronts Lissy and tells her that everything she had experienced that day will come to pass in 30 days if America does not repent. Her dream was a prophetic warning.

The angel carves a 30 into the meat of Lissy's arm as a sober reminder that her time is short. God means to destroy America for its backsliding ways. If America does not repent as a nation, America will fall.

What listeners say about 30 Days to Redemption

This is a great audio book

This is a great audiobook for someone who's trying to understand their life through the lense of the Gospel. Especially with the topic that are largely covered by the secular world, we need teachings that are Gospel-centered, yet relevant to the context of abuse/addiction in this modern time.

Such a great resource.

Walking through this audiobook in a group context is the best experience. Being able to thoughtfully explore the questions at the end of each chapter with other men has been hugely impactful.

One of the few audiobooks we use in ministry

We lead to ministries and counsel couples. This is one of the few go-to audiobooks we use to help others experience grace and healing. Can't recommend it highly enough.

We are using this audiobook at church for Redemption Groups. It really gets to the bottom of what motivates our lives and what 'idols' we have set up in our hearts. Easy to understand and includes thought-provoking questions.

The world’s most powerful story

This is a dark chocolate book - serious, nourishing, bittersweet. It is packed with intense stories of addiction, suffering, and recovery. Then, right through, you find the story of the Exodus which, I think, is the world’s first freedom story. Well done Scott.

...someone published a book imagining God's reaction to America's rejection of Him! This book is timely and a good premise. I loved the faith that Lissy showed throughout her ordeal. And I loved how her kids stayed by her side, without question, from the minute she told them about her dream. All in all, it is a plausible visualization of how a call to action would be received in the United States today. I will be on the lookout for the next book in the series.

The one downside for me was the narration. I had to get past Tina Marie Shuster's performance to the real story Lisa Scott was called to write. Tina's voice is good and enjoyable to listen to when she is straight narrating. For me, it was how she made Lissy sound more whiny than anything else and her male voices were horrendous. Glenn sounded like a cartoon character.

I received this book for free from Audiobook Blast in exchange for an honest review.

New author and narrator for me

Where does 30 Days to Redemption rank among all the audiobooks you’ve listened to so far?

I mainly listen genres other than this. I like to listen to apocalyptic thrillers and have listened to many. This book was different and interesting.

I like the way the main character is strong in her faith and devotion.

Have you listened to any of Tina Marie Shuster’s other performances before? How does this one compare?

This is my first book narrated by Tina. I like her voice and feel like she would do well reading YA as she sounds very youthful.

This book was provided to me in exchange for an honest and unbiased review courtesy of Audiobook Blast.

This is a Christian pre-apocalyptic thriller, that is not much of a thrill to read, nor does it contain the compelling force that it was obviously intended to have. I enjoy good Christian books, especially thrillers (Ted Dekker, Frank Peretti, Steven James, etc.), and I've even listened to a few of the Left Behind audio books, but personally, I find such material as The Book of Eli, to be far more compelling than the typical apocalyptic writing coming out of the Christian publishing world.

As much as the initial idea may seem plausible, the execution of the story falls flat on its face and ranks somewhere between the unbelievable and the absurd. Having had a revelation of the end of America, would a prophetess really act so nonchalantly about her responsibility to warn America of impending doom, that she would be more concerned about what color to paint her nails, or where to go out to eat for lunch? Come on, this is less serious than most of the juvenile fiction I've read. The story is slow moving overall, holding the suspense and action back until the very end of this first part of this trilogy.

It seems like the target audience was intended to be teenagers, around 13 to 15 years old, and I don't mean that as an insult to the author.

The reader did a good job on the performance, but it doesn't make up for what the story lacks.

This book was provided to me in exchange for an honest and unbiased review courtesy of Audiobook Blast.

One amazing book for this time

Yes. It is a uneque read.

Have you listened to any of Tina Marie Shuster’s other performances before? How does this one compare?

Yes. This is the best.

Not a book for me

This book was just ok, the only thing i can say I liked about the book was it was christian based. The narration was horrible. I hate to leave such a low review on a book since this audiobook was provided by the author at no cost in exchange for an unbiased review courtesy of Audiobook Blast but this one wasn't for me