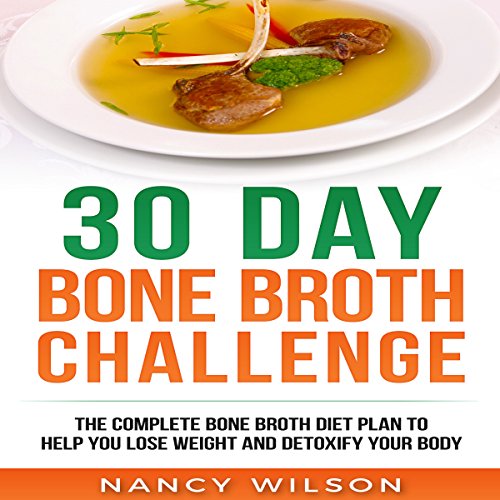 The 30-Day Bone Broth Challenge has the potential of taking a very old practice and making it part of a vital health regimen for modern times. Millions have been galvanized by the promises of better health, weight loss, and mental clarity - all seemingly contained in one bowl of broth! If you too have wondered what all the buzz is about, look no further than this audiobook! Inside this guide, you will find all the age-old secrets of bone broth unlocked!

Since its inception, bone broth has become a magical panacea of sorts for all kinds of issues. But unlike many of the other health gimmicks out there the healing powers of bone broth is entirely rooted in fact. Bones have dense and powerful nutrients locked inside of them that can only be obtained by boiling them under intense heat. This my friends, is the simple origins of bone broth, and people all over the world have been boiling up these meaty bones to reap the reward for thousands of years - that is until quite recently.

You see, in many ways the process of making bone broth has become a kind of lost art. This is due to the creation of artificial broths and artificial flavoring that merely attempt to mimic the wholesome goodness of actual bone derived broth. These artificial broths are usually full of sodium, harmful fat, MSG, and other detrimental chemicals that have no business being inside the human body! Bone broth on the other hand, takes the most sought-after nutrients we need to be healthy and strong, and pulls them right out of the bones you boil!

And besides the great health benefits you can get from these bones, the taste of good, old-fashioned bone broth is second to none! Here in this audiobook, we set you on course for a full 30-day bone broth challenge, presenting you with the tools and recipes you need to consume nothing but bone- broth-based meals for the next 30 days!

Helped us loose some weight

Nancy is the real deal! She not only understands her stuff, but she is enthusiastic about making a difference in people's lives!

The recipes for Bone Broth are excellent and will enable me to make lots of different types for my kids. I'm also looking forward to trying the recipes for other recipes she has included. Each family wants this audible!

I like the Bone Broth Diet so much and have had great progress with it. So I had to buy the audible. Losing weight as I type!

This is an unbelievable audible that describes in detail what to use in making each meal from breakfast to lunch to dinner. Every meal is given to healthy eating and in losing weight the correct method. I would suggest it to those engaged in taking care of themselves by eating healthy. The meals are delightful as well!

I have already seen results and relief from nagging health companies by following the advice from Nancy. I am so happy I found this wealth.

Great audible with a lot of healthy recipes

love the recipes and they are simple to execute. I have lost weight and feel great. More strength. Give all aspects of why and how to do plus great recipes.

Your Health-Conscious Friends Will LOVE You...

Diet is working great for me and simple to maintain. My system is so happy that I have taken all of the chemicals out. No longer have that deep hungry feeling if you go too long before eating or even a short time. I just have to give some time in the kitchen prepping. So many foods out there have things I am allergic too and this diet I have no problems with whatsoever.

I love the way she describes everything and great recipes.My husband and I have been cooking from these recipes for 5 days.Observable changes in his blood sugar previously!!

It explains that it is essential to be aware of accurately what is in your food, and the effect of eating food in its complete form. The recipes included therein are easily made, and the ingredients are accessible at most grocery stores.

I honestly loved the audible.

I was amazed at how much healthier I thought just drinking bone broth. The way the AUDIBLE describes things makes it easy to try the recipes and better my help.

It was enlightening with new information. My mother made broth all of the time. Who understood it had real health benefits. I used the recipes, too. Lots of ideas to use bone broth.

it with to stay healthy.

Love Nancy Wilson's book....very informative....you do not require to buy anything else with this diet.....

You need time to provide these recipes though, not for a cook who wants to whip up something fast and is on the go all wk. The recipes take time to prepare, but worth it. This is for weekend kind of cooking, except you are a full time stay at home homemaker.

I believe its worth 5.5 stars its a good audible and yes you can eat normal tasty food on her Bone Broth eating plan, myself, I worry about eating too much of all her good stuff. Hopeful for me I'm an very lazy chef mini and micro fasts are very nice for lazy cooks like me. Her non-cooking items are just as great love all her shakes and coolers!

Great recipes and simple to understand. Some of the ingredients are more difficult to find, might have to go to a health food store rather than a regular grocery store.

I bought this audible as a coworker was doing this diet and I love it. It's a great audible with lots of recipes and it's a sustainable and healthful diet.

This is a great audible

If you get this audible, you don't need a diet book. It has all the information here.

I'm a big fan of bone broth and was so excited when this audible hit. It didn't disappoint. The recipes provide mouth-watering, yummy dishes that are easy to make and nutritious to boot. Who understood there were so many ways to use this healing broth.

Lots of information and recipies

Day by day plans, purchasing lists, and recipes. To the point doesn't go off on tangents. Instructions are simple, easy to follow.

OK, I was suspicious.

This audible made making bone broth simple. Sure beats paying a chance to buy it naturally. Very enlightening audible.