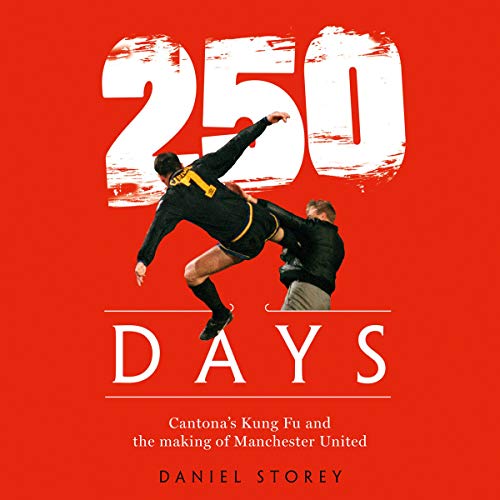 250 Days: Cantona's Kung Fu and the Making of Man U

By: Daniel Storey
Narrated by: Colin Mace
Try for £0.00

A cold winter’s evening. Manchester United away against Crystal Palace at a packed-out Selhurst Park. Eric Cantona, United's mercurial talisman, has been man-marked closely all game by Richard Shaw and become increasingly frustrated. In the 48th minute, Cantona’s temper boils over, and he kicks out at Shaw. The ref shows him a red card. On his way off the pitch, a Palace fan rushes towards the hoardings to hurl abuse. The Frenchman loses it. He launches into the crowd, aiming a kung fu kick at the fan’s chest. He is forcibly restrained and then taken off down the tunnel. The football world is stunned. Nothing like this has ever happened before.

What followed has entered football folklore: the media furore, the seagulls following the trawler and the longest domestic ban ever handed to a player; it would end up lasting 250 days. As Manchester United’s campaign stuttered towards a trophy-less conclusion, surrendering the league on the last day of the season and losing the FA Cup final, Cantona withdrew from the public eye. But behind closed doors, Ferguson was planning the most remarkable of fresh starts for his star player and for a new-look United.

250 Days tells the story in brilliant detail of one of the most turbulent times in United’s recent history. Showing Cantona in a new light and the genius of Ferguson’s man management and vision in close relief, it is an incredibly entertaining and insightful look at the most controversial episode of the Premier League era.

What listeners say about 250 Days: Cantona's Kung Fu and the Making of Man U

A must for every 90’s football fan

Eric was my idol growing up and having seen all this first hand, it was great to finally know all the details of what happened and to weed out all the gossip.

Good book let down by the narration

The narrator's poor attempt at accents are a major negative. His poor attempts at mimicking the accents of Sir Alex Ferguson and Eric Cantona would be more at home in old British sitcoms such as 'Allo 'Allo! or Mind Your Language.

Great read and charts a icons transformation of a team. Another excellent narration frim Colin Mace you will be hooked

Brilliant book. Well read. Really took me back. What a man he was. King Eric.

What an informative, whitty and thoroughly entertaining account of an iconic period in English football history. I would thoroughly recommend this to any sports fan, irrespective of which team you support 😎

From start to finish this was a brilliant listen. If you’re a united fan or Cantona it’s a must!

Daniel at his best

I loved the content of the book. The narrator's delivery was generally excellent, but knowing the actual voices and accents of those involved his impressions took me out of the book (particularly Roy Keane who was given generic Irish accent rather than the distinctive Cork accent he has). The idea was fine but its difficult to implement so I would have preferred it being read out normally.