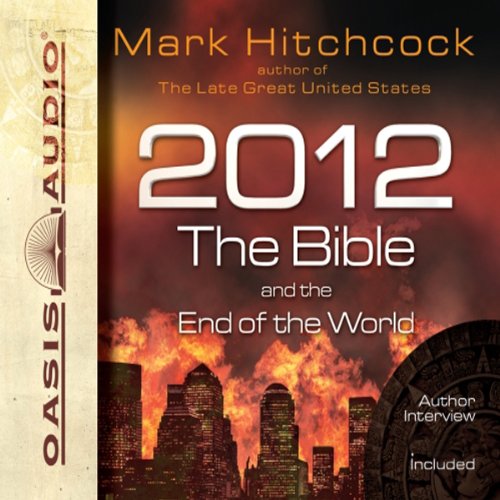 By: Mark Hitchcock
Narrated by: Wayne Shepherd
Try for £0.00

In 2012, the Bible and the End of the World, best-selling prophecy expert Mark Hitchcock explores a fascinating last-days controversy that is gaining the attention of millions all over the globe. What should Christians make of the rapidly spreading speculations that the world will end on December 21, 2012? The ancient Mayans were expert astronomers and their advanced calendar cycles predict 12/21/2012 as a catastrophic day of apocalypse. This prophecy has spawned a growing number of fringe-element books, Web sites, and even a major movie.

Missing in the furor is a biblical perspective. Bible teacher Mark Hitchcock, whose books have sold more than 300,000 copies, examines the following questions: Why December 21, 2012? Can we trust the Mayan alarm clock? Does the Bible say anything about 2012? What signs will tell us that Armageddon is near? This audio book provides a fascinating survey of both the historical past and the prophetic future. Listeners will discover how to effectively counter baseless speculation with biblical fact.

What listeners say about 2012, the Bible, and the End of the World

It was well spent in so far the wider background to the myths of the Mayan Calendar and all the prophets, seers, oracles and others that we hear aroud ths '2012 mystery' but it is rather long.

Wayne Shepard did well, he was easy to follow along with

Was 2012, the Bible, and the End of the World worth the listening time?

yes and no, it is a tad too long, maybe an hour less would have been better but with the detail it is understandable. I thought the discussion with the aurthor at the beginning well worth the listen.