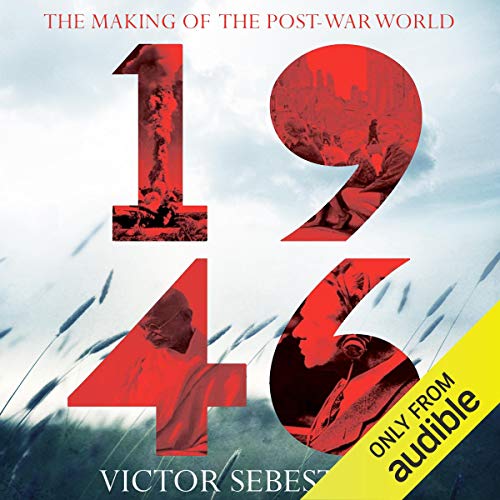 By: Victor Sebestyen
Narrated by: Cameron Stewart
Try for £0.00

With the end of the Second World War, a new world was born. The peace agreements that brought the conflict to an end implemented decisions that not only shaped the second half of the twentieth century but continue to affect our world today and impact its future.

In 1946 the Cold War began, the state of Israel was conceived, the independence of India was all but confirmed, and Chinese Communists gained a decisive upper hand in their fight for power. It was a pivotal year in modern history, in which countries were reborn and created, national and ideological boundaries were redrawn, and people across the globe began to rebuild their lives.

In this remarkable history, the foreign correspondent and historian Victor Sebestyen draws on contemporary documents from around the world - including Stalin's personal notes from the Potsdam peace conference - to examine what lay behind the political decision making. Sebestyen uses a vast array of archival material and personal testimonies to explore how the lives of generations of people across continents were shaped by the events of 1946.

Taking readers from Berlin to London, from Paris to Moscow, from Washington to Jerusalem, and from Delhi to Shanghai, this is a vivid and wide-ranging account of both power brokers and ordinary men and women from an acclaimed author.

What listeners say about 1946

A period not often covered in detail

I don't know about anyone else but when I was taught about the second world war we always tended to stop when the allies had won. This book offers a glimpse into the world in the immediate aftermath of the war, and it isn't a pretty sight.

If you want some perspective and the behaviour of the victorious allies then I'd recommend this book.

When one thinks the WW2 finished in 1945 that was that. This book brings us back to the fact and the reality how serious the aftermath of the War was throughout the World and the struggle to lay down a new world order. It highlights the importance of establishing that new world order for future generations. I found the book very informative. I'm happy to recommend the book.

History and relevance of 1946

This was far from the dry history lesson I was expecting. To make a whole book about the events that occurred during one year has the worry that it may be like a piece of string, wandering and rambling.
But I found I was hooked from the outset and carried along like an incoming tide. So many events happened during this year that have long lasting effects that reverberate to this day. Virtually all countries around the world have been affected in one way or another.
Decisions made or not made during this year precluded events such as the creation of the Iron Curtain, the breakup of the British Empire and the eventual American involvement in the Vietnam War.
There is an awful lot of detail is this book and it is extremely easy to follow and get swept along with.
Will definitely be listening to this book again in the future as there is almost too much information to grasp in one go.
Recommended.