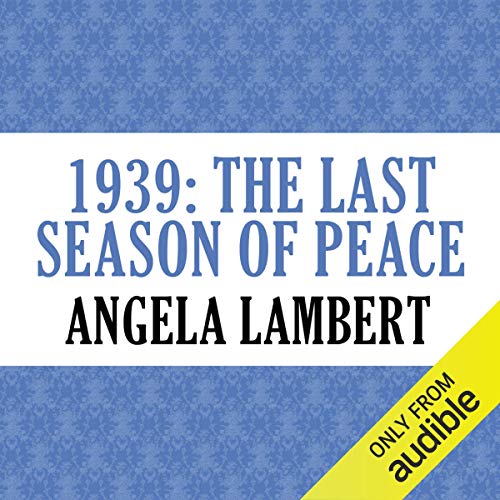 It was called the London Season, and for three centuries it had been a time of fashionable suppers and brilliant balls that introduced England's most aristocratic and eligible girls to society. Though by 1939 the stately gavottes and minuets had long since given way to waltzes and fox-trots, the cream of young womanhood still curtsied low before the Queen and then went out to dance the night away with the young men they would one day marry. But the Season of 1939 was different: it was to be the last. And like many a finale, it lives on in memory as a lovely, enchanted dream, all the more beautiful for the horror and destruction that would follow so soon.

Based on a wealth of first-hand reminiscences, press clippings, and memorabilia, 1939: The Last Season of Peace is a fascinating portrait of this fairy tale about to end. It captures the end of an era as it recreates a world whose inhabitants still believed in empire and tradition. It is a vivid picture of a generation suspended in a brief moment of sunlit summer glory, before the gathering storm of World War II swept it all away.

Angela Lambert (1940 - 2007) was a British journalist, art critic and author, best known for the novel A Rather English Marriage. Born as Angela Maria Helps to a civil servant and a German-born housewife, she was unhappy when sent to Wispers School, a girls' boarding school in Sussex, where by the age of 12 she had decided that she wanted to be a writer. She went to St Hilda's College, Oxford, where she read politics, philosophy and economics. She began her career as a journalist in 1969, working for ITN before joining The Independent newspaper in 1988.