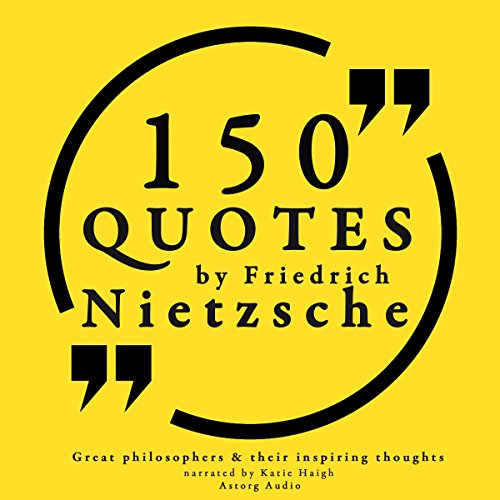 By: Friedrich Nietzsche
Narrated by: Katie Haigh
Try for £0.00

Nietzsche is a major figure in Western philosophy. His work is radical, sometimes violent, often ironic; it fascinates anyone bold enough to delve into it, exerted a profound influence on modern intellectual history, and covers a wide range of subjects. Nietzsche's writings border on the poetic; his aphorisms are particularly well-known for conveying all the radicality of his thinking in a intense but light, sometimes amusing manner.

What listeners say about 150 Quotes by Friedrich Nietzsche

Some classics some repeats

Any time you need a different perspective just pick a random point and listen to a couple of quotes.

The quotes are from Nietzsche. 5 Stars. Read by a woman who sounds like she would be more comfortable reading the menu at a cafe. Get a man to read a man’s works instead of this PC crap. N would agree.

A collection of Nietzchean aphorisms to ponder...

Selection of some memorable sayings by Friedrich Nietzche, a philosopher known for writing in brief, pithy statements. It is a listenable, satisfactory production, except for the distracting passage in French at the beginning.