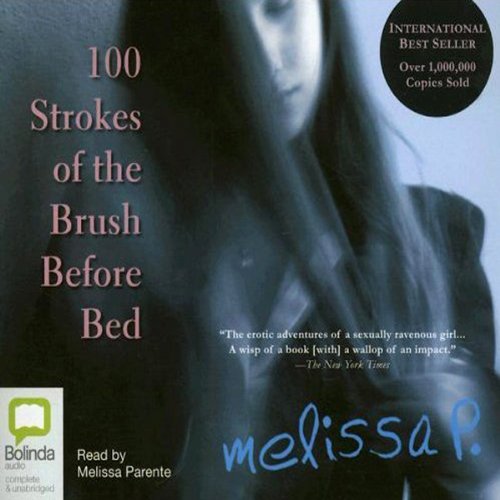 100 Strokes of the Brush Before Bed

This international best seller (over a million copies have been sold) is the fictionalized memoir of Melissa P., a Sicilian teenager whose quest for love rapidly devolves into a shocking journey of sexual discovery.

Melissa begins her diary a virgin, but a stormy affair at the age of 14 leads her to regard sex as a means of self-discovery. Over the next two years, she plunges into a succession of encounters with various partners, male and female, both her age and much older, some met through schoolmates, others through newspaper ads and Internet chat rooms.

In graphic detail, Melissa describes her entry into a Dante-esque underworld of eroticism, where she willingly participates in group sex and sadomasochism, as well as casual pick-ups. Her secret life is concealed from family and friends, revealed only in her diary entries.

"A book that has had a wallop of an impact ... readers have simply devoured it." (The New York Times)
"Melissa tells herself no fairy tales - and therein lies the odd, potent purity of these pages." (Publishers Weekly)

What listeners say about 100 Strokes of the Brush Before Bed

Not a Vampire Story..

Overall it was enjoyable.

I hated everything about this book

This book was just terrible. The narrator has a thick Australian accent, but the story takes place in Sicily. It was distracting. The story itself is just pornographic. The girl is silly and naive on one page and then getting gang banged like ten pages later. I am not a prude or usually disturbed by sex, but this was just unbelievable and gross. I have never returned a book on audible. This will be my first. It was that bad.

This book is not only abominably bad it is also also quite possibly a fraud. It is full of giveaways that the story is completely fabricated and quite likely not even by a woman -- my guess is that it was written by a confused male transvestite. It is badly written with painfully precious prose and the steamy fantasies don't ever have even the shadow of a chance of being credible as something that really happened. Teenagers may engage in some pretty wild sex, but when doing it they don't behave and talk like jaded roues from stories like Eyes Wide Shut.

One wouldn't think that it would be possible to make this tripe even worse by reading it out loud, but the author's eponymous narrator manages it in style. She sounds like a fashion boutique salesgirl from the East End reading a bedtime story to a toddler. Laughable.