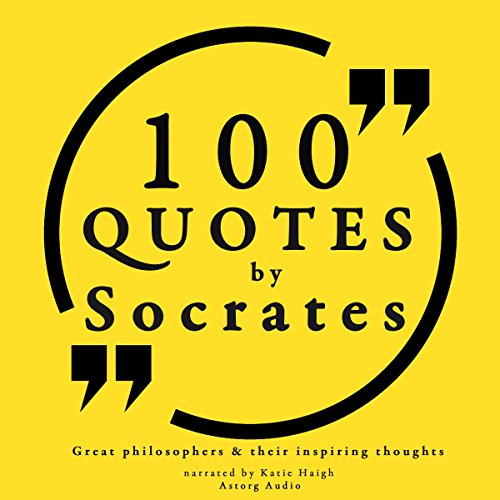 By: Socrates
Narrated by: Katie Haigh
Try for £0.00

Socrates is an enigmatic figure, known chiefly through the accounts of others like Plato and Aristophanes. He was one of the most brilliant intellects ever, and devised what would later be called the Socratic method, which is a way of leading one's interlocutor to see his errors and contradictions through clever questioning before leading him to the truth.

In ancient Athens, Socrates was widely known as a "gadfly", that is, an annoying insect buzzing at people's ears, because he kept questioning prejudices and contradictions; he was eventually tried and executed for "corrupting the minds of the youth".

What listeners say about 100 Quotes by Socrates

love love this . I loved the music

love this. this was an awesome book for a quick.re iew of some.motivational quotes. great book

there's a nice selection of quotes, but many of them are repeated several times for some reason. granted, the wording might be a bit different, the slight difference does not introduce any new content.