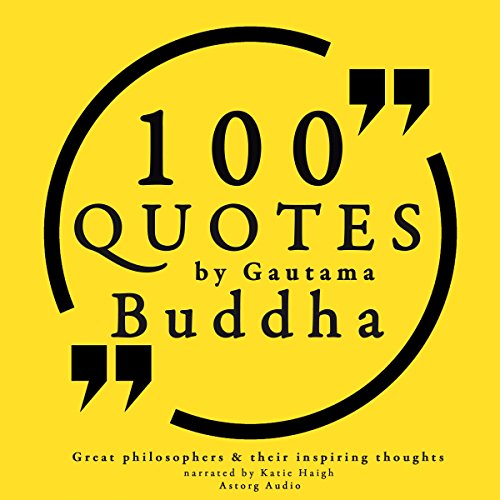 By: Gautama Buddha
Narrated by: Katie Haigh
Try for £0.00

Gautama Buddha is also known as Siddharta Gautama, or simply the Buddha, which means "Awakened" or "Enlightened". Born a prince, he chose a path of ascetism only to realize that it was as profound an illusion as self-indulgence. He achieved Enlightenment after 49 days of meditation; his awakening led him to discover the cause of suffering and the ways to eliminate it. These discoveries founded Buddhism, and his Four Noble Truths still form the heart of its teachings.

What listeners say about 100 Quotes by Gautama Buddha

A wonderful meditation. Words of truth to uncover your inner peace, the sentiment unaffected by Katie Haigh. Beautifully read.

Great for morning reflection and quiet meditation. Calming voice and relaxing music. Worth the download

good value for 5 bucks. I love the profoundness of Buddha. great to remind me of what's important.

When I need to calm down, get centered, get inspired and feel peace, this is my "go to". The quotes make sense and remind of what is right and what I need to remember, especially on those overwhelming, challenging days. Beautiful, calming narration delivers these priceless gems of wisdom.

But it could be a lot more than 100 quotes. I need more of these. Marcelo.

thank you so much Katie for your amazing voice

I have gone through a hard time lately. Listening to this audiobook everyday and whenever I need it gave me an opportunity to better myself to deal with difficult situation. Love it and thank you.