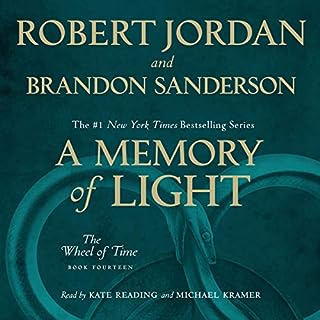 Since 1990, when Robert Jordan’s The Wheel of Time® burst on the world with its first book, The Eye of the World, listeners have been anticipating the final scenes of this extraordinary saga, which has sold over 40 million copies in over 32 languages. When Robert Jordan died in 2007, all feared that these concluding scenes would never be written. But working from notes and partials left by Jordan, established fantasy writer Brandon Sanderson stepped in to complete the masterwork.

A fitting end to a remarkable journey which I finally finished at 4:45 this morning, today will not be fun but it was worth it.

Thank you Robert Jordan, Brandon Sanderson, Michael Kramer and Kate Reading, it's been a pleasure.