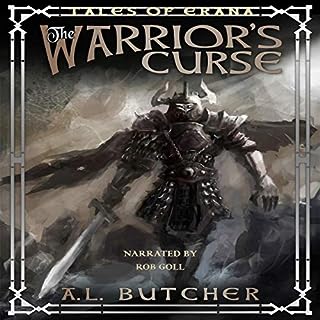 In a land of forbidden magic, a mysterious cave holds both riches and danger for three adventurers who discover a mighty treasure and a terrible secret.

Not being a reader of magical, mysterious, fantasy tales, I started listening with a degree of scepticism...I needn't have, as Alexandra Butcher's Tales of Erana: The Warrior's Curse, narrated by Rob Goll, caught my imagination and immediately pulled me into a very different world. The strong writing and crafted narration about an unfamiliar place and strange characters, soon became familiar and of concern...what was going to happen and how would those involved fare?
Then themes became apparent that exist closer to home and in the present day...fear, lust, betrayal, ignorance and how tragedy repeats itself from one generation to the next.

Rob Goll's tone is rich and powerful yet at the same time understated, giving the story voice without overwhelming it.

I intend to listed to more by this talented author and her well chosen story teller...