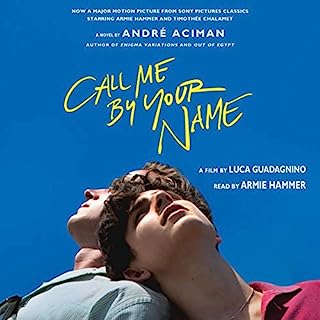 Call Me by Your Name first swept across the world in 2007. It is the story of a sudden and powerful romance that blossoms between an adolescent boy and a summer guest at his parents' cliffside mansion on the Italian Riviera. During the restless summer weeks, unrelenting but buried currents of obsession, fascination, and desire intensify their passion as they test the charged ground between them and verge toward the one thing both already fear they may never truly find again: total intimacy.

Beautiful story, wonderfully written and deeply moving.
interestingly, the narrator to me was not as good as he was in Oliver's role in the film. His voice is lovely it's just something with the way he related the story sounded a bit flat. 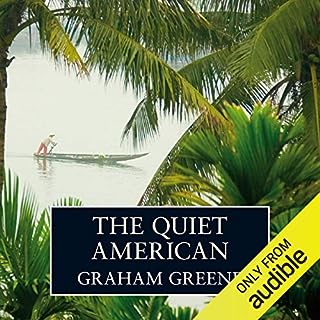 Into the intrigue and violence of Indo-China comes Pyle, a young idealistic American sent to promote democracy through a mysterious 'Third Force'. As his naive optimism starts to cause bloodshed, his friend Fowler finds it hard to stand and watch.

Graham Greene was a brilliant writer. His painfully true observations on human motivations, the sharp, though dark and terrifying points he makes about innocence, honesty and good intentions were utterly hair raising - because they were so true. Being a catholic, I am deeply fascinated with his relationship to religion. though I can't say I really understand it. The performance was okay, can't find much fault with it but not very memorable either. 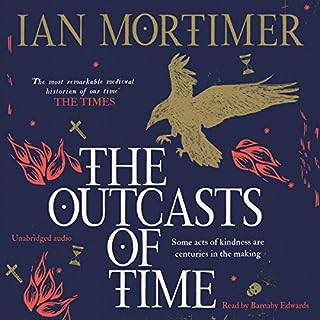 December 1348: With the country in the grip of the Black Death, brothers John and William fear that they will shortly die and go to Hell. But as the end draws near, they are given an unexpected choice: either to go home and spend their last six days in their familiar world or to search for salvation across the forthcoming centuries - living each one of their remaining days 99 years after the last. John and William choose the future and find themselves in 1447, ignorant of almost everything going on....

Very well researched, entertaining history lesson. Not high literature though well written. A bit too heavy on the moralizing at the end for my taste. I don't like all the conclusions spelled out for me in detail, it gets a bit didactic and "educational" in that way. 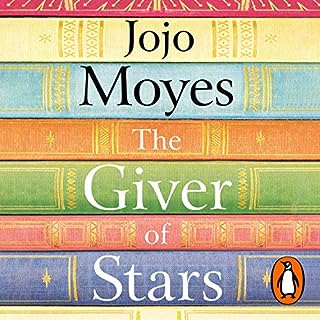 Alice is stifled, bored, and misunderstood. So when she meets wealthy and handsome American, Bennett Van Cleve, she is quickly swept off her feet. Marrying him and moving to America seems like a great adventure - but life as a newlywed in stuffy Baileyville, Kentucky, is not at all what she hoped for. Until, that is, she responds to a call for volunteers to start a travelling library, surprising herself by saying yes, before her husband can say no.

Bit of a disappointment

I had loved Me Before You. Then I saw this book in a book shop and read what is said on the back and was intrigued to listen on audible but I was disappointed.
At one point I even thought I might never get to the end but felt that it would not quite be justified to return.
It was not rubbish but to me this was just an average romantic novel. The romantic bits made me laugh to be honest, I found them a bit schoolgirlish.
The performance from the narrator is good.
I don't think I will experiment much more with this writer though. 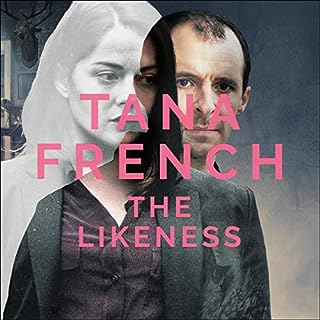 Still traumatised by her brush with a psychopath, Detective Cassie Maddox transfers out of the murder squad and starts a relationship with fellow detective Sam O'Neill. When he calls her to the scene of his new case, she is shocked to find that the murdered girl is her double. What's more, her ID shows she is Lexie Madison - the identity Cassie used years ago as an undercover detective.

Okay, so bumping into a doppelganger that resembles someone as convincingly as it was described in this book is pretty unlikely. But I feel a bit sorry for the reviewers who got stuck on this because as fictional stories go, this is a pretty fascinating idea, actually. (But then, I know someone who has met her own daughter's doppelganger and to me, the way she described that experience makes this idea worth exploring and stretching.) I thought that in the book there was good reasoning for why people might not realize for a while that the doppelganger is not the person they think she is, and among them, the very unlikeliness of this scenario is probably the strongest.
I liked the characters and the narrator was very good too. I only had a couple of small issues.
I felt that if anything was not so well believable was Cassie's breeziness after she went undercover. Having only just escaped death by the skin of her teeth, I personally would find it extremely strange for someone to act as if nothing was the matter.
As a character, Sam was quite uninteresting and boring, I really didn't see how he fit into the story.
I found this book very good but have to say, I liked In The Woods more. Somehow the atmosphere worked better for me and I am listening to it now a second time because of the BBC series, which did not do justice to either story and I want to hear again how the story really was. 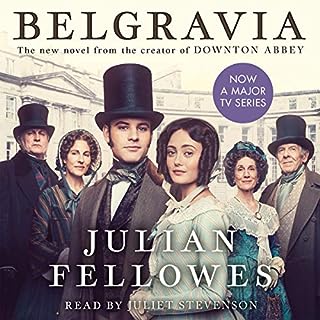 Found it boring and gave up on it

I am a Downton Abbey fan and was really looking forward to this book but I found myself unable to even pay attention.
I normally have no problem with Juliet Stevenson, only as a narrator, I did not find her very engaging. Some of her characters are exaggerated, caricature-like and that doesn't help with making the characters interesting.
It was mainly the story though that I completely lost interest in by about half-way through and never even finished the book. 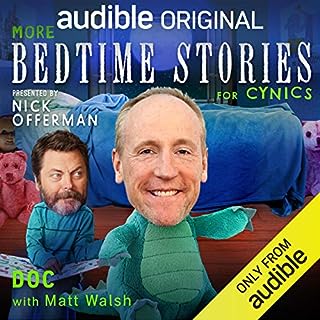 What really happened to Snow White, from the perspective of a medically trained dwarf.

I am sure there will be plenty of people who like it.
I found the stories a bit juvenile and boring and the humour bland. 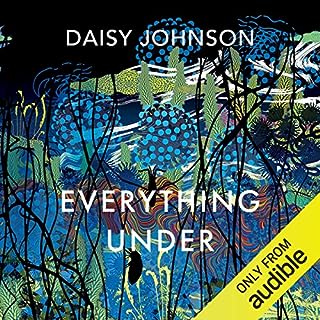 Short-listed for the Man Booker Prize 2018. Words are important to Gretel, always have been. As a child, she lived on a canal boat with her mother, and together they invented a language that was just their own. She hasn’t seen her mother since the age of 16, though - almost a lifetime ago - and those memories have faded. Now Gretel works as a lexicographer, updating dictionary entries, which suits her solitary nature. A phone call from the hospital interrupts Gretel’s isolation and throws up questions from long ago....

Not sure how to evaluate this book

I accidentally clicked on a star and now I can't remove it.
It is not a bad book. It is quite fascinating but for me just very difficult to follow the narration and I keep losing the plot about what is happening and to whom and how the timeline of the story adds up and how the characters relate. The narration is just okay.
I see a lot of people have loved it and with good reason, I just probably need to try the printed version. 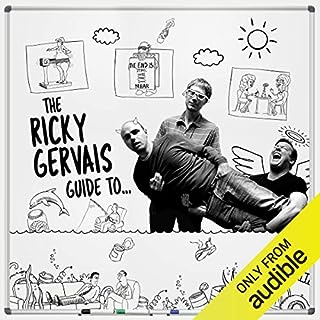 Join Ricky Gervais, Steve Merchant and the glabrous luminary Karl Pilkington for a series of in-depth discussions from the human body to the arts. Ponder along with the comedians as they debate the important things in life and society, from the controversial to the everyday. As always, in the midst of taking stances on issues as wide ranging as capital punishment and natural remedies, both Ricky and Steve take the opportunity to draw out Karl's often nonchalant and superficial take on the subjects leading to hilarious tangents.

I suppose for die-hard Ricky Gervais fans it's hilarious.
I like his humor sometimes but Karl started to annoy me half-way through the second episode and I never got any further. 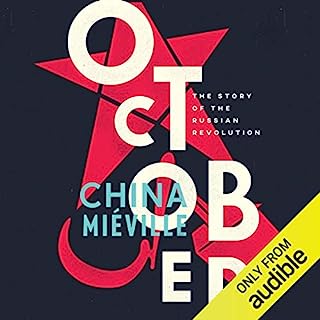 The renowned fantasy and science fiction writer China Mieville has long been inspired by the ideals of the Russian Revolution, and here, on the centenary of the revolution, he provides his own distinctive take on its history. In February 1917, in the midst of bloody war, Russia was still an autocratic monarchy: nine months later it became the first socialist state in world history. How did this unimaginable transformation take place? How was a ravaged and backward country, swept up in a desperately unpopular war, rocked by not one but two revolutions?

Not so good for audio

I am not sure what exactly I was expecting from this one but I am disappointed.
I found it very difficult to listen to as it is more like a documentary, rather than a novel.
After the first foreword there was a very long second chapter which was a pretty detailed history lesson in what had lead to the revolution. I was relieved when it was over but unfortunately the story itself too felt more like a documentary than a novel.
I would only recommend it for people who are utterly fascinated in the politics and all the ins and outs of events around the Revolution in lots and lots of detail.