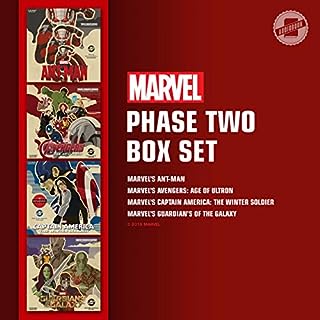 This Marvel Box Set includes the stories: Marvel's Ant-Man - Before he was Ant-Man, Scott Lang was a master thief who wanted to change his ways. Marvels Avengers: Age of Ultron - Things go very wrong when Tony Stark and Dr. Bruce Banner begin work on a global peacekeeping system, and the Earth's Mightiest Heroes are put to the ultimate test. Marvel's Captain America: The Winter Soldier - After the Avengers saved the planet, Steve Rogers begins working for S.H.I.E.L.D. in Washington, DC. And finally, Marvel's Guardians of the Galaxy.

Everyone is doing MCU movie marathons as there is less than two weeks till Endgame comes out!!! I'm not allowed to as it would cost too much so instead I'm listening to these!!! They're really good and I feel like I'm watching the movie as I can picture the scenes in my head so easily!! These books are *amazing*!!! The narrators sound just like the actors who play the characters in the MCU!!! I like this audiobook a lot!!!!