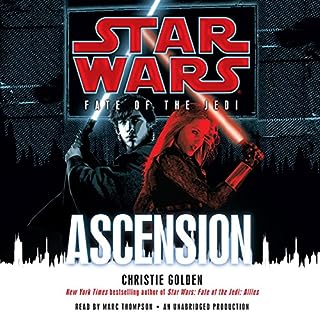 Luke and Ben Skywalker pursue the formidable dark-side being Abeloth, the Lost Tribe of the Sith is about to be sundered by an even greater power - which will thrust one Dark Lord into mortal conflict with his own flesh-and-blood. On Coruscant, a political vacuum has left tensions at the boiling point, with factions racing to claim control of the Galactic Alliance. Suddenly surrounded by hidden agendas, treacherous conspiracies, and covert Sith agents, the Jedi Order must struggle to keep the GA government from collapsing into anarchy.

the seris was alright

the entire seris comes off as an elaborate fanfic.
while I like powerful luke he just seems to perfect and never makes any mistakes.
not to mention the constant changing of perspective get annoying at times.
and there's the inconsistent character of haven't spirit the first time his spirit is how he is remorseful but believes what he did was justified, however, in this he's a arse.

them there s abalouth, the thing with a super powerful main character is that the bars constantly get raised as to how strong the bad guy needs to be, it's the same problem Dragon ball has.
the fact that the authors were reluctant to kill any of the popular characters like the members of the council, and that abalouth never actually kills any Jedi she fights as far as I can remember don't sell the apparent danger the characters are in.

oh and darla, how did the writers expect anyone to be live in the star wars universe someone taking harsher and harsher steps to control what happens in the GA woudknt be seen as another Palpatine, she had a child killed in cold blood killed a reporter on live television and I'm supposed to be live that the Jedi were the only ones worried?

it's not that I didn't enjoy the seris aside from the above and the fact it was three books too long it was alright.
I enjoyed vastarer and Ben's back and fourths even if I'm annoyed how cleanly it was resolved ( why wasn't she the one to remove his harm?) 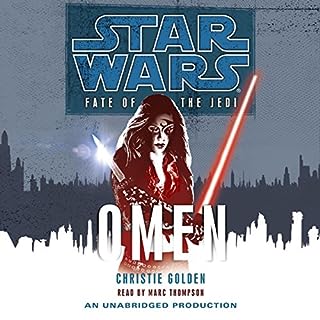 The Jedi Order is in crisis. The late Jacen Solo's shocking transformation into murderous Sith Lord Darth Caedus has cast a damning pall over those who wield the Force for good: Two Jedi Knights have succumbed to an inexplicable and dangerous psychosis, criminal charges have driven Luke Skywalker into self-imposed exile, and power-hungry Chief of State Natasi Daala is exploiting anti-Jedi sentiment to undermine the Order's influence within the Galactic Alliance.

bit short and would have preferred more progress

I enjoyed it and am for the most part enjoying the series but this book didn't seem to be doing much of anything other than kicking the Jedi while they were down.
luke and Ben's segments were quit interesting and made the relation ship between feel a bit more real.
the most interesting parts were that that followed the sith girl but her parts were very few and far between.