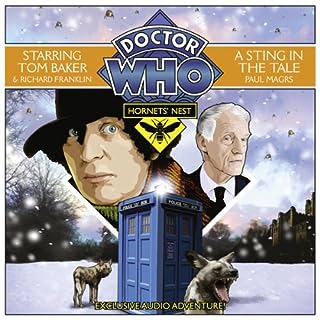 Tom Baker reprises the role of the Fourth Doctor in the fourth of five thrilling brand new audio adventures, with Richard Franklin as Mike Yates. In a bleak midwinter, an order of nuns protect their Mother Superior from ravaging dogs. But something is very wrong here indeed, and the Doctor is about to get badly stung. Written by the acclaimed Paul Magrs, A Sting in the Tale also features Clare Corbett, Susie Riddell and Rula Lenska.

Dark compelling frightening horror superbly read. The Doctor in magnificent form, part 4 is the best part of this tale so far. Battles with beasts and creatures through time and space. 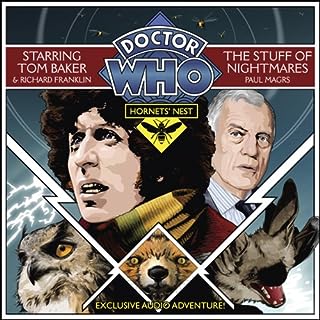 Baker is Sublime as the doctor, you'll love it

Baker is phenominal, A fantastic command of the english language, an exciting delivery Tom has a supreme confidence, one of the greatest voices of the last century, totally imersing.

Baker could make an inflight Safety Manual sound exciting to a pilot.

It leaves me rather irritated to think that Tom Baker hasn't been churning these audio books out by the dozen.

If you think that Jonathan Ross costs 13 million a year and he can't even pronounce his R's, baker must be into 9 figures.

No sign of ring rust here Baker is the Doctor, the Doctor is Baker, he didn't go away he, owns this, in fact everything he reads.

Tom Baker would give Christoper Lee, Peneoply Keith, or Steven Fry a run for thier money any day of the week.