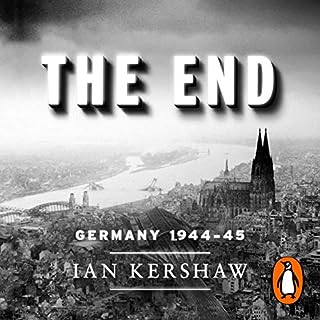 The last months of the Second World War were a nightmarish time to be alive. Unimaginable levels of violence destroyed entire cities. Millions died or were dispossessed. By all kinds of criteria it was the end: the end of the Third Reich and its terrible empire but also, increasingly, it seemed to be the end of European civilization itself. In his gripping, revelatory new book Ian Kershaw describes these final months, from the failed attempt to assassinate Hitler in July 1944 to the German surrender in May 1945.

There are so many books on the Second World War that this tragic period has been extensively documented. Kershaw tries to distinguished his books from the others by just concentrating on the Germany side of the story, and giving only brief accounts of the fighting. The key revelation for me was how the July bomb plot allowed the Nazi regime to destroy any opposition, and allowed them to take Germany to their nihilistic end. What the author does is concentrates on how the war affected the population, and how propaganda was used to make people believe there was no alternative to fighting till the end. For most people they adopted a passive stoicism, and try to keep a normal life going. I like the story of the high government official that wrote about the need to change monitory policy in the last months of the war. While there is obviously new research in this book I don't think it adds much to what we already know about the end of the war. I was a bloody mess, and the Nazi elite were callous brutes. 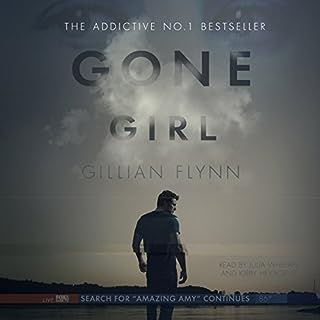 Who are you? What have we done to each other? What will we do? Just how well can you ever know the person you love? These are the questions that Nick Dunne must ask himself on the morning of his fifth wedding anniversary, when his wife Amy suddenly disappears. The police immediately suspect Nick. Amy's friends reveal that she was afraid of him, that she kept secrets from him. He swears it isn't true. A police examination of his computer shows strange searches. He says they aren't his. And then there are the persistent calls on his mobile phone.

Best thriller of the year

I've had a bad run on novels recently so it was a relief to listen to this which was gripping.  It's not too bloody, which many thrillers have become.  The writing is of a high standard and makes some acute observations about relationships.  But more importantly it's a great plot which makes you want to keep listening. 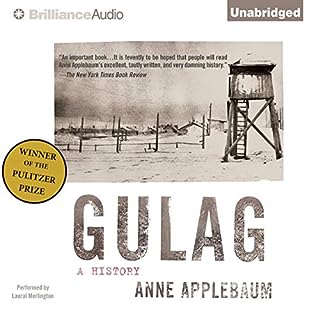 The Gulag - a vast array of Soviet concentration camps that held millions of political and criminal prisoners - was a system of repression and punishment that terrorized the entire society, embodying the worst tendencies of Soviet communism. In this magisterial and acclaimed history, Anne Applebaum offers the first fully documented portrait of the Gulag, from its origins in the Russian Revolution, through its expansion under Stalin, to its collapse in the era of glasnost.

Worthy but not riveting

This book came very well reviewed and won prizes, but I found 27 hours about the Gulags a bit of a slog.  It did say this on the tin so I only have myself to blame.

The history  of the gulags has been neglected compared to all the literature on the unique event that is the Holocaust, so there is a need for this book.  It will be valuable to future authors, but it is not an easy listen.  I tended to chip away at it in small bits which worked OK, but it didn't work for me for longer sessions. 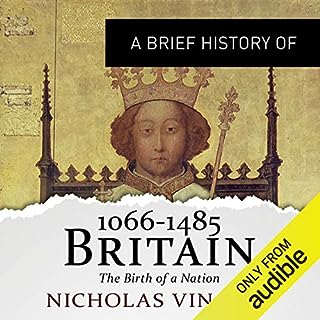 I read  this book a year ago, yes audible I still read.  I thought it was great so I decided to also get the audiobook. It gives an excellent survey of the period.  The author is clearly an expert in the period.  He is particularly good on the the problem of sources for the period, and that we know far less than we think about the events.  He starts the book by saying the reason medieval historians were so good at code breaking in WW2 was they were use to piecing together a story from fragmentary facts. Some of the coverage of different periods is uneven.  The Norman conquest and the run up to it is given extensive coverage, but some  other periods are skipped over quickly. Religious social and economics factors are also covered, which means the book is covering a lot. 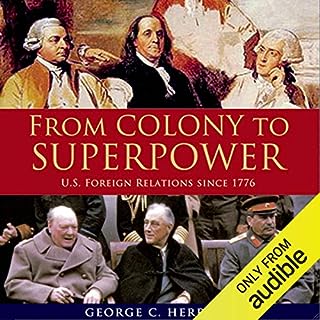 This prize-winning and critically acclaimed history uses foreign relations as the lens through which to tell the story of America's dramatic rise from 13 disparate colonies huddled along the Atlantic coast to the world's greatest superpower.

The advantage of telling just the diplomatic history is that you can see more easily the roots of diplomatic events.  If we take the Cuban crises, there was no way the US could back down.  The book shows this wasn't just about the cold war, the US had a close history with Cuba stretching back to the 19th century.  Similar themes emerge from the book, but at times it felt a bit of a slog. 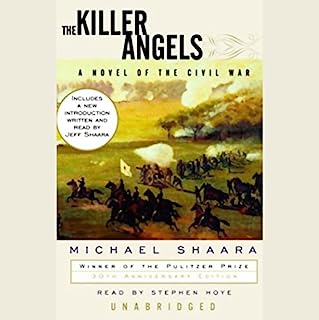 After 30 years and with three million copies in print, Michael Shaara's Pulitzer Prize-winning Civil War classic, The Killer Angels, remains as vivid and powerful as the day it was originally published.

This is the one of the  best novels I have read about war. The book won the Pulitzer in the 1970's but the subject matter was unfashionable then and it went rather unnoticed, but over time it's popularity has increased.   It's a gripping account of the battle of Gettysburg.  Seen  mostly from the view of the Confederate generals, it brings out the agonies of command as they know they are fighting a lost cause.  The whole course of the battle is described  and the fighting is vividly told.  High class fiction and a must for anyone interested in the American Civil war. 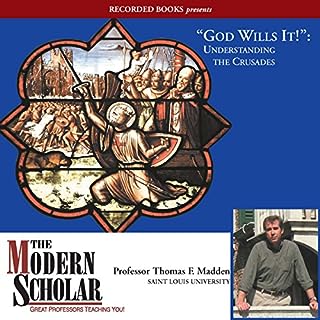 The story of the many crusades are filled with an unremitting passion to keep or return the home of Christianity to Christians. It is also filled with death, destruction, disorder, greed, avarice, and self-interest on all sides. Much of what occurred during the Crusades has come down to us today in the form of continued suspicion among religious ideologies - not only between Christians and Muslims, but also internally among Christian sects and, to some degree, among Muslim sects.

As an introduction to the crusades this couldn't be better. Told in a series of lectures by the author, each is highly informative, and contain none of the self indulgent digressions you sometimes hear at university. The author has a good reading voice and clearly is on top of his subject. I will be trying more of this series. 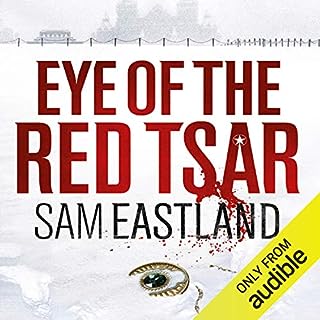 The first in a gripping new series of detective novels set at the birth of Stalin’s Russia. It is the time of the Great Terror. Inspector Pekkala – known as the Emerald Eye – was the most famous detective in all Russia. He was the favourite of the Tsar. Now he is the prisoner of the men he once hunted. Like millions of others, he has been sent to the gulags in Siberia and, as far as the rest of the world is concerned, he is as good as dead....

Not as good as Phillip Kerr

I wanted this to be like a Bernie Gunter novel but found it rather disappointing. Eastland is a decent writer but I doing think his principle character is interesting enough or the action gripping. 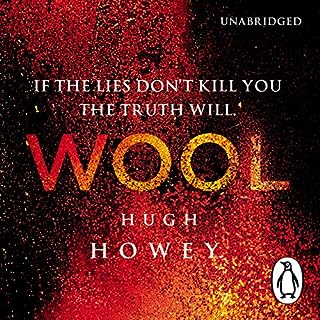 An epic story of survival at all odds and one of the most anticipated books of the year. In a ruined and hostile landscape, in a future few have been unlucky enough to survive, a community exists in a giant underground silo. Inside, men and women live an enclosed life full of rules and regulations, of secrets and lies. To live, you must follow the rules. But some don't. These are the dangerous ones; these are the people who dare to hope and dream, and who infect others with their optimism.

It starts well then I started to lose some interest. Then it picked up again, but as the action starts to build I became confused by what was going on. Who was fighting who and how that was progressing became very confused for me. In the end I didn't care what happened, which was a shame as there was a good story in there. Maybe the film will be better. 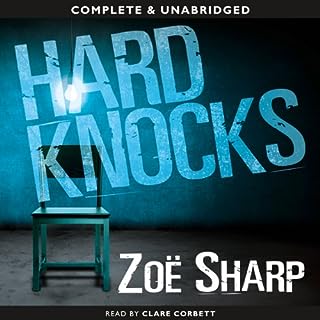 Charlie Fox really didn't care who shot dead her ex-army comrade, Kirk Salter, during a bodyguard training course in Germany. But when old flame Sean Meyer asks her to go undercover and find out what happened, she just can't bring herself to refuse. Keeping her nerve isn't easy when events bring back fears and memories she's worked so hard to forget. It's clear there are secrets at Einsbaden Manor that people are willing to kill to conceal.

I only managed to listen to half the book and that was mostly at x3. I just thought the plot based around a training school for bodyguards was dull. The character and some of the action was OK, but not worth the effort of getting to the end.