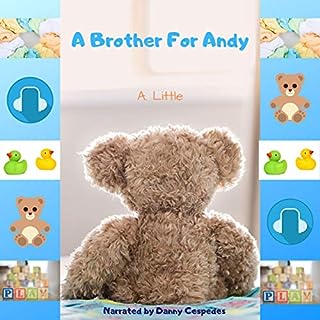 Andy's daddy loves to walk on the kinkier side while Andy is not only more vanilla, but only lives as a Little part-time. When Andy suggests that Daddy adopt a second Little to become Andy's full-time baby brother, Andy ends up re-evaluating his life and his role within their family. Things begin to change when they meet Timmy and bring him home to play. Is this truly the happy-ever-after of all their dreams? This is a story featuring age play. All characters are adults and are in a consensual relationship.

Andy, a part time little we have briefly met before in this series, has some big decisions to make. Knowing his daddy wants a full time little he suggests getting a little brother. But maybe he to wants to be full-time. This story seems to have more sex scenes then the other books. But it’s definitely one way for the three to bond.
Although some references where made to the other MCs from previous books I don’t think it’s Necessary to read the previous books in the series to understand what is happening. You may miss a little but not enough to truly impact the joy of reading this book. 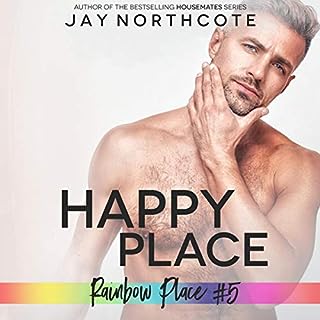 George’s strict upbringing has left him ashamed of his sexuality. In his forties now, he's yet to come out or even kiss a man - until he meets Quentin. Quentin has had enough of bad relationships with men who won't commit. Still raw from the last one, he’s not ready to try again. But George is sweet, and helping the older man get some experience might be a fun diversion.

This is a sweet romance! It’s obviously not the first in the series (if it’s part of a series???) but it really didn’t affect this story.
There’s a small age gap- Q is nearly 28 and George is 45, but they get on well and Q really doesn’t act so young.
There’s a little bit of ist but a hea!
It’s really quite a relaxing listen! 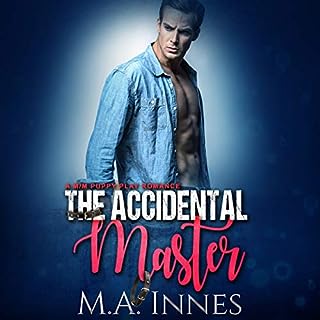 One accident has turned Jackson’s life completely upside down. When Jackson’s sister inadvertently posts an ad for a puppy play book instead of his dog training business, his inbox explodes with the most interesting emails he’s ever seen. In a sea of kink that he’s never even considered, one sweet letter stands out. It’s polite and earnest, and something about the two men’s words touches him in a way he never expected...but they’re not just looking for a lover...they’re looking for a master.

Cooper is over optimistic, sewyer therefore swings the opposite way! Poor master loveingly puts himself in the middle!
This story is complete but I would love to read(heat) more. I’ve looked ahead and I can! I’m really looking forward to see where these boys go next! 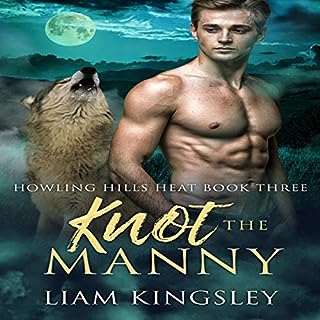 Thorne isn't ready to fall in love. His wife has been gone for only two years; he's still a grieving widower. Most days, he's not sure if he'll ever be ready to open his heart again. A simple, quiet existence with his beloved son, Mason, will have to be enough for him - and when it's not, he's got his friends in the Howling Hills pack to take up the slack.

Can be a standalone

I haven’t read the rest of the series but I fully understand everything happening in this book. There were some other characters that obviously were MCs in this series and it’s set up to introduce the next two MCs at the end of this one.

I have one (ok many) pet peeve in books. It’s when the wrong character’s name is used. As I don’t know if it was the Author or narrator who made the mistake I took a star off both areas (only one in total).
The story gave some really good plot points but they weren’t followed by the author, they seemed to concentrate on the one same issue the whole time, solving but then bringing it back up time and again.
The narrator got the voices confused a few times and that was confusing to the story.
If you like full on fluffy, just about instead love and people thinking cause they love a kid they love their parent/career, then you’ll love this. 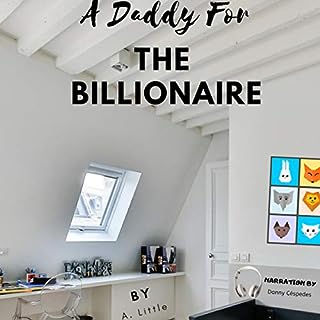 Cheswick Ludwig Fontaine IV was tired. Groomed to be a successful business from birth, he'd studied and worked hard his entire life. He'd even turned the millions left him by both sets of grandparents into his first billion while still in college. Unable to face the pressure of being urged to make even more money, he simply walked out of a meeting. Richard Neville knows a Little when he sees one. Cheswick might not know it yet, but he was made to be Richard's Little.

Ok, so Daddy/little is not my kink but I have been able to enjoy the the BDSM/power exchange of then before so I happily put my hand up to review this series. Well I’m scared to go on!
If I woke up hung over in a locked room on a private island being held to things I supposedly said while drunk, I would freak out. There was no consent in this book. It was all the Daddy’s way or the highway. No prior consent or discussion if that’s what the little wanted in the relationship. And if he didn’t do it that way he wouldn’t get a chance at that relationship at all. I also found the sex scenes creepy. As I said, not my kink but I’ve read sex scenes between this dynamic before and haven’t been creeped out. I’m worried moving on to the rest of the series.
The narrator did well. It occasionally made it sound like the other was talking and internal thoughts were often said as if out loud.
I think this story had a lot of promise but was made too unrealistic with the wealth of both men and how the little just accepted everything. 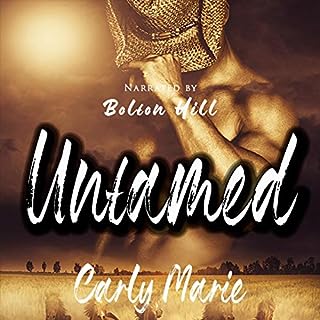 Kyle Mitchell has forged his own path in life. He’s happy with his job as the head of horse breeding operations at Untamed, working for his best friend, Rand. Knowing his family has never accepted his sexuality, Kyle is shocked to find out he’s expected to be at his brother’s wedding with his boyfriend...a man who doesn’t exist. After inheriting Untamed from his parents, Rand Everette is living his dream. His quiet life is turned upside down when his best friend, Kyle, asks him to be his fake boyfriend for his brother’s wedding. Faking chemistry won’t be difficult.

Love me some cowboys!

What a fun story. Slightly predictable but most romances are. Although the grandmother was an awesome surprise!
I loved how Rand just accepted his role and the fact that Kyle got in over his head.
I think the blank acceptance from the hands was a bit much, there was one that was uncomfortable and I think it would have felt more real if he or someone quit but oh well.

The narrator was great. Only a slight change in voices but it was enough! 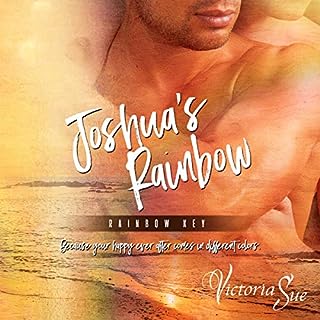 Rainbow Key - an idyllic island retreat off the west coast of Florida. Think wedding destination, white sandy beaches, lurve…except at the moment Joshua is struggling to pay the electricity bill, they’ve no paying customers, and even if they did they can’t afford the repairs from the devastating hurricane that struck three years ago – and to top it off they have to take in Daniel, a grumpy businessman who has been ordered by his doctor to take some time off before he has a heart attack from too much stress.

This is the first in a series but is great as a stand-alone. (Although I haven’t heard the others yet).
Ms Sue writes wonderful characters that I grew attached to as they slowly revealed themselves and their past though out the story.
The mcs are both strongly characterised and this story is about them but the glimpses we see of the others at Rainbow keys really makes me want to read/hear their stories too!
Mr Stark does a great job of bringing the characters to life. My only slight complaint is that occasionally I couldn’t tell if the characters were thinking or speaking what was being said.
Other then that it was great! 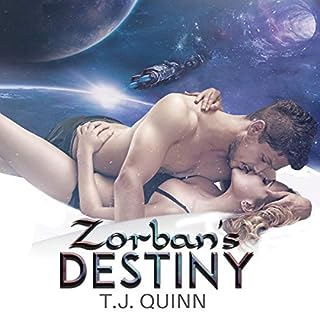 About to ascend to the throne...Prince Zoban loses everything. Where has his soul mate gone? In their world, Thalia, soul mates are real. From birth, they search for each other, and when they connect, the depth of their understanding how it should be removes any doubt. When “the one” for Prince Zoban disappears, chaos reigns in the kingdom. Is it his uncle who took her? The prince can’t be king without his mate. The royal line is threatened.

Wow, umm not sure what to say

I think the story was awful. It needed to be edited, there were many contradictory plot points. Things happen that didn’t make sense so to excuse them little, what I imagine were in brackets sentences, kept needing to be added. It was so sexist- where at her house or a guest at his she cooked and cleaned for him. She would say no so he would just kiss her forcefully until she changed her mind. It also was so unbelievable I was rolling my eye more often then not. Also the chapters just happened, it was like a maths program put them in, in the middle of a conversation suddenly there would be a pause then “chapter 13” would be said and the conversation just continued.
The narration was ok. Very monotone but each character had their own voice so at least it wasn’t confusing who was speaking. 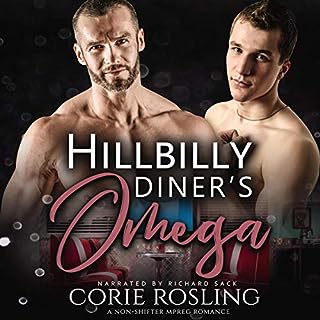 I thought I had an alpha who would love me forever. But I found out the hard way that I was wrong. Broken and bleeding, I have no choice but to run, but I have nowhere to go. No one to turn to. Until I meet him - Jace. He promises me a home. Safety. Maybe even a second chance at love. I want to believe that's possible. But after all I've been through... I've always been looking for something I couldn't find - that one special omega who could become the center of my world. I've almost given up hope when Dai walks into my life. One look at him, and I know.

I liked the story but...

My lasting thought of this audio is “Was this read by a computer?” It’s the same voice but ones a little deeper then the other. No emotion and has long pauses like the page needs to be turned or someone needs to find the right letter to type the next word. The reading really brought me out of the story.
The story wasn’t so bad, but a lot of the problems the MCs face are solved before they start, for example they say if you’re pregnant this won’t matter, we know he’s pregnant but the next several chapters go though this problem before they say, oh it doesn’t matter cause you’re pregnant. Also, he’s living on the streets, but has loving parents who show up as soon as he shacks up with someone just to say hi, but they didn’t care he was homeless and on the run? Admittedly I’m still not sure why he was on the run.
It still made me smile in places I would try another of this series, but if it’s not an improvement ten I will happy DNF. 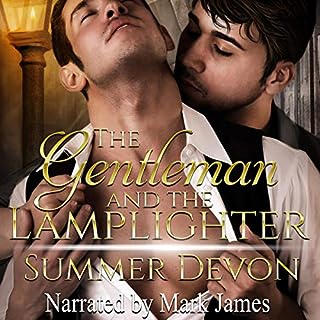 I quite enjoyed this story. A bit star crossed lovers a bit misery needs love. Although I felt everything wrapped up a bit quickly and a bit too neatly I do love how Summer Devon gives the boys their ending. But I won’t spoil it here!
The narration is good but I often got confused between who was talking. But only occasionally, and I quite liked his inflictions and the accent was perfect for the story.
A nice read that I would recommend for those wanting something light hearted.