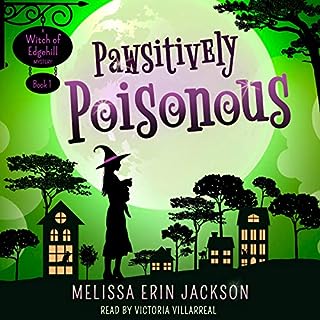 Amber Blackwood, lifelong resident of Edgehill, Oregon, has earned a reputation for being a semi-reclusive odd duck. Her store, The Quirky Whisker, is full of curiosities. It has everything from extremely potent sleepy teas and ever-burning candles to kids’ toys that seem to run endlessly without the aid of batteries. The people of Edgehill think of the Quirky Whisker as an integral part of their feline-obsessed town, but most give Amber herself a wide berth. Amber prefers it that way; it keeps her secret safe.

When Amber's friend is found dead, the local police chief puts her at the top of the suspect list. He's clearly always been suspicious of her though she never knew just how far back that mistrust stemmed from. Amber decides to do a bit of her own investigating and there are plenty of suspects in town.

Such intriguing magic, I would love some of Amber's toys! I really liked that the magic wasn't perfect and infallible, it seemed so much more realistic this way. 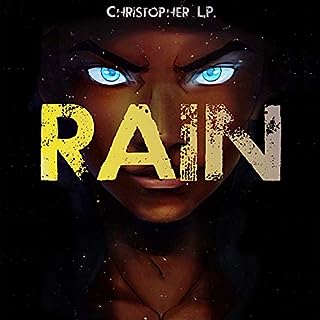 Grab a hold of your faith. Fight for your redemption. And at all costs, Protect your power. Introducing the first installment in the Rain trilogy, An action-packed and unpredictable YA superhero fantasy. For 15-year-old, Tyler Grey, the line between myth and reality is quickly blurred, when he inadvertently becomes the host to an ancient power. A power that puts him on the radar of not only a deadly black ops organization but also very old and malevolent beings, that are eager to see both it and him destroyed. He has but two choices: Rise up and fight! Or die!

Kept back at school for not finishing his schoolwork, Tyler finds himself in the middle of a fight between his teacher and an unknown person. After being shot in the back, he wakes up to discover he suddenly has strange glowing eyes and magical powers.
This was a good story and I always like reading anything with mythology in it, though it was a bit of a confusing mix of Ancient Egypt and Greek Gods.
I love the narrator's voice, but the style of reading is really tiring. Every sentence ends on an exclamation and there are tons of random pauses which makes it quite hard to listen to. 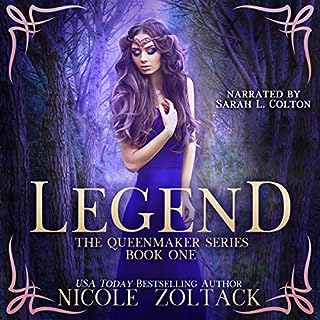 Combination of Robin Hood and Sword in the Stone

Alena is not satisfied with her life and refuses to give herself wholly to being just a maid. When she accidentally pulls a magic sword from a stone, her whole life changes and she discovers that there is a lot more to her story than she ever knew.
While she doesn't agree with the way things are and continues to fight back for her own rights, she also seems to scorn anyone else who has aspirations for a better life. There are quite a lot of contradictions in the book and I found the olden days language seemed a bit forced.
I really like the idea for the story with the combination of Robin Hood and Sword in the Stone. I hope there will be more about Alena's friend Liam in future books.
In terms of the narration, I felt like the accents were all over the place. 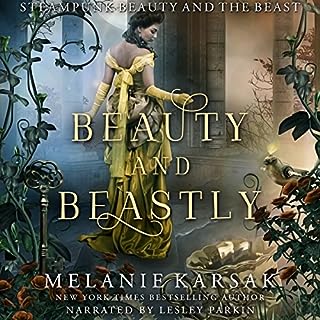 When Isabelle Hawking and her papa set out from London on a sea voyage, Isabelle is thrilled. Visiting foreign courts, learning from master tinkerers, and studying mechanicals is her dream. But Isabelle never arrives. Swept up in a tempest, her ship is lost. Isabelle survives the storm only to be shipwrecked on a seemingly deserted island. The magical place, dotted with standing stones, faerie mounds, and a crumbling castle, hints of an ancient past. Isabelle may be an unwilling guest, but her arrival marks a new beginning for the beastly residents of this forgotten land.

Isabelle is a smart heroine and inventor

After a shipwreck, Isabelle finds herself in a clockwork world full of surprisingly detailed and realistic automatons. The Lord seems very harsh and angry but after spending a few days on the island he starts to soften. Isabelle soon realises there is a lot more going on than she first thought.
Isabelle is a smart heroine and inventor, though she seems a bit too obsessed with fashion, mentioning it all the time. She creates wonderful clockwork creations, they are described are beautifully in the book that I would so love to see them for real. Being a Beauty and the Beast retelling, I was happy to read about the huge library in the mansion.
The narrator of the audiobook is very expressive, really bringing to life Isabelle's thoughts and feelings. 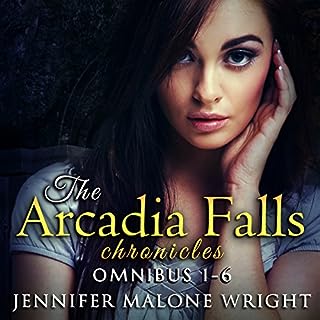 A war is brewing between the hunters and the vampires and Chloe is determined to strike against the vampires before they have a chance to attack. Unfortunately, her plan goes all wrong and results in a massive takeover by the undead.

It's the Vampire apocalypse

It's the Vampire apocalypse, there are baby vamps popping up all over and the hunters really have their work cut out trying to keep them under control.
I enjoyed this series more than Vampire Hunter's Daughter as the characters are now more developed. I really liked the change of perspective with Drew and Zander narrating the last 2 books and I was happy to see there are even more books in the series.
Most of the narration was good but the men sounded fairly dodgy narrated by the female narrator. 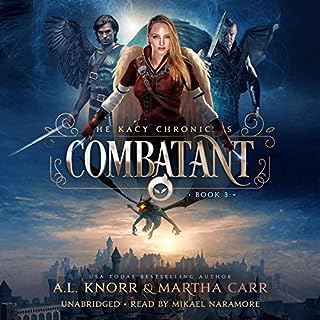 Jordan’s father is in deep trouble. He's trapped in the tombs of Trevilsom, and rescuing him is only the first of her challenges. When she, Toth, and Eohne find him, Allan is a shadow of his former self, and even Eohne isn't sure how to help him. Meanwhile, on the islands of Rodania, several attacks by harpies suggest sabotage. How else could they be getting through the magical protections? The Rodanian government has been arrogant enough to assume a military wouldn’t be necessary, leaving the nation vulnerable. This costly mistake could well spell catastrophe for Rodania’s citizens, unless action is taken, now. So, why is the king so slow to respond?

Action packed and doesn't let up at all.

The third book of the series is action packed and doesn't let up at all. Jordan needs to save her Dad and finally gets the truth about her mother, which isn't what she was expecting at all.
Jordan makes more friends and allys and she getting stronger and more skilled every day but the promise she made to Sohne is hanging over her. Luckily, amidst all the adventures, my favourite character, Blue, is there to save the day with a friend of his own. Once again there is a bit of a cliffhanger at the end but not as bad as previously. 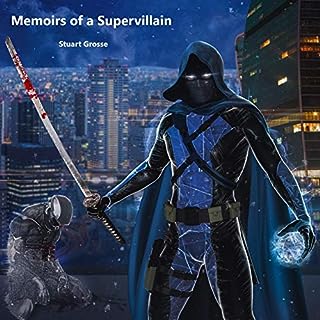 This is the memoir of the Supervillain known to the world as Iceblade. It chronicles his achievements and his failures, his loves and his losses. Learn about the theft of the Mona Lisa, the subjugation of Lady Victory, and the slaughter of the Holy Order of the Word. Hear for the first time about the death of Bytegeist. All from the point of view of the man himself.

Basically how to be a supervillain

Basically how to be a supervillain. There were a lot of lists and explanations at the start so it took too long to get into the story, but there wasn't much plot anyway. Mostly quite dull but also graphic in a few places.
The main character has no redeeming qualities, he says not all villains are evil but he actually is pretty awful.
Narrator is ok but I had to listen on a much higher speed. 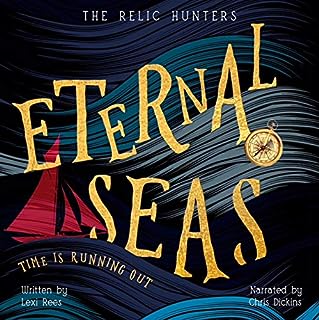 Lost and scared after a violent storm, Finn and his sister, Aria, take shelter on a remote island. They discover a parcel contains a relic belonging to a long forgotten people. Locked inside are powers which will change their lives, and the world, forever. As Finn realizes his connection to the relic, a vision strikes him - but what does it mean? Who should they trust? And if they decide to follow their hearts rather than their orders, will they manage to deliver the relic in one piece?

A great start to the series.

Finn's family are smugglers, but since his mother disappeared it's just him, his father and his sister Aria. This time, the parcel they have to pick up and deliver is much more mysterious than usual. And when Finn realises he has a strange connection to it, his whole world changes.
A mystical world full of wonder, including my favourite, a magical stall that disappears as soon as you've bought something!
This book was aimed at a younger audience than I was expecting but once I still really enjoyed it. A great start to the series. 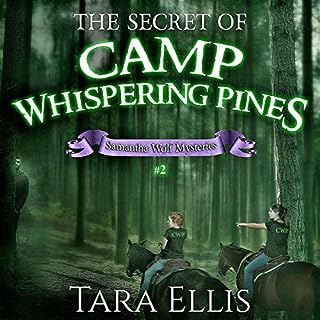 What could be better than hiking, swimming, and horseback riding? Having a mystery to solve, of course! When Sam and Ally embark on their next quest together, they have no idea what secrets hide in the shadows at Camp Whispering Pines. Set in the beautiful, rugged mountains of the Pacific Northwest, the clues are slowly revealed, and it's up to the two girls to figure it out. New friendships are formed, while at the same time enemies lurk nearby.

Sam and Ally's second adventure. This time they are excited to go to camp where they will be able to swim and go horse riding, as well as making some new friends. However the reality isn't quite as expected. The camp leader seems to have it in for Sam from the beginning and they start to find clues that something very strange is going on. 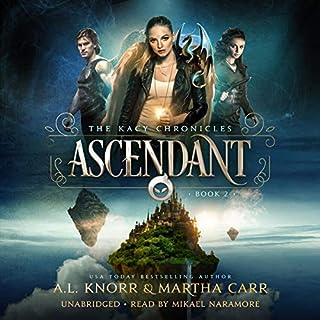 Jordan is a step closer to uncovering the mystery of her mother's disappearance. When the locket with her mother's portrait inside begins to behave strangely, she learns that what seems a simple family heirloom is actually a magic compass. Following the locket means there is no turning back. Jordan finds herself running for her life from someone she expected would welcome her with open arms.

Jordan is getting closer and closer to finding her mother and discovering the truth of what kept them apart all these years.
I absolutely love Blue, a little pet dragon would be the best! I enjoyed the book and really wasn't ready for that ending! Once again i'm going to be diving into book three as soon as possible.