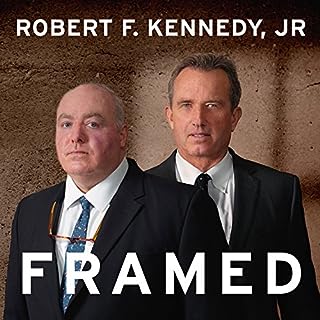 In 1975, 15-year-old Martha Moxley's body was found in the backyard of her family's Connecticut home, and a member of America's beloved Kennedy family, then also 15, was accused of the crime. What ensued was a media firestorm and a whodunit that transfixed the nation, providing daily debates - and cruel, dinner table entertainment. Now, 40 years after Michael Skakel's conviction, his cousin, acclaimed activist and writer Robert F. Kennedy, Jr., has taken matters into his own hands to get the charges dropped and clear his cousin's name.

Terrible narration, and utterly loaded with bias. This take on the terrible Moxley murder is an exercise in ego alone, I understand that they want to present a different version of events and uncover some of the untruths at the time but the narration coupled with the writing, diminished any credibility - sensationalist and hammy to the point that at times I actually laughed out loud, I could have been listening to a Raymond Chandler 'hard boilled cop' story. I have also listened to Timothy Dumas's Greentown, also not the most unbiased version of events and littered with whimsical unnecessary history lessons, deliberately rose coloured portrayals of the characters and places and a fully loaded conclusion but I did at least get to the end of it. I didn't even finish Framed, and I'm returning it.