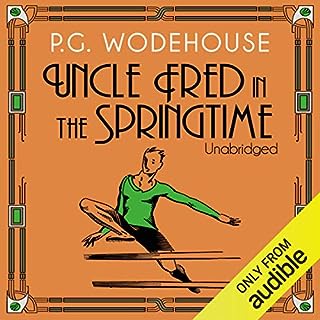 Uncle Fred, or to give him his full title: Fredrick Altamont Cornwallis Twistleton, fifth Earl of Ickenham, is considered by some as a "splendid gentleman, a sportsman to his fingertips". Mr Twistleton, nephew to Earl, and otherwise known as "Pongo" to his friends, has a differing view. He simply describes his uncle as "being loopy to the tonsils".

Not so witty wodehouse

This was a bit longer than the usual Wodehouse and as such the story tended to ramble and it was tricky keeping track of some of the very similar characters.

Would you ever listen to anything by P.G. Wodehouse again?

Absolutely. I have been reading and listening to Wodehouse for many years and there are many titles, especially Summer Lightning and What Ho Jeeves.

What does Jonathan Cecil bring to the story that you wouldn’t experience if you had only read the book?

He certainly attempts to bring the characters to life, and mostly succeeds. However the number of very similar characters as written by Wodehouse proved to be a challenge.

Did Uncle Fred in the Springtime inspire you to do anything?

It has inspired me to check the length of comic novels before purchasing. I found the character of Uncle Fred a bit flat, so will avoid him in future.

I would certainly look out for other books narrated by Jonathan Cecil.